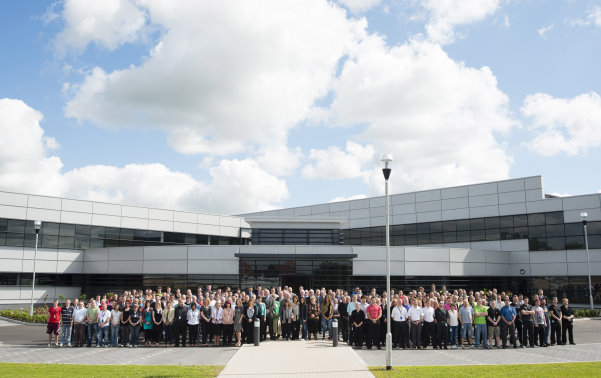 PING Chairman and CEO John A. Solheim officially unveiled the company’s brand-new, multi-million pound office facility at their Gainsborough, UK,  headquarters on 12 July at 10.30 am. The build and development marks the continued growth of the family-owned company launched by John’s father, Karsten, in 1959. It will add to what is already a substantial facility, offering additional operational and office space.

A bespoke, two-storey office incorporates a central hub which will serve as a social area for employees, offering a restaurant, lounge and plentiful IT facilities. In addition to this development,PING’s current factory has received an aesthetic revamp and internal restructuring and now matches the external cladding facade found on the new building.

PING are one of the world’s leading golf brands, and boast a playing staff of international stars including world-number-three Lee Westwood, Masters champion Bubba Watson, British starlet Tom Lewis and other household names such as Miguel Angel Jimenez, Angel Cabrera, Louis Oosthuizen and Hunter Mahan. They are the global leader in custom fitting, with flocks of amateur golfers travelling up to the centre at Gainsborough Golf Club in Lincolnshire, also owned byPING, for a fitting session every year.

PING is an integral part of the community in Gainsborough, which has been the home of its European operations since 1973. The company, still at the heart of the worldwide golf industry, has gone from strength to strength during their 39 years in the town. This building marks the continuation of this trend and a further step into modernity. One thing is for certain; this is an office any company would be proud of.

The development is also hugely significant for Gainsborough. PINGis a crucial cog in the area, and the outstanding facility will provide a boost for the employees, and the town in its entirety.

Adventurous Journeys (AJ) Capital Partners has expanded its portfolio of golf hotels in the Scotland with the purchase of The Marine Hotel in Troon.

A well-known and respected figure within the international hotel and golf industries, Gary Silcock has held prominent leadership roles at the likes of La Manga Club, The Belfry, and Gleneagles, where he was the Director of Golf

Nick Lewis and Ben Peppi, from JMW Solicitors - Sports Law Team in London) – explain the many ways in which the golf sponsorship landscape is changing.