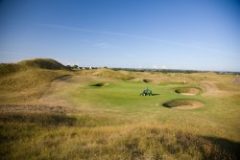 John Deere and its dealers Godfreys, Alpha Plus Groundcare and Dublin Grass Machinery are the exclusive suppliers of golf course maintenance equipment in 2011 to The Open Championship at Royal St George’s, The Walker Cup at Royal Aberdeen and The Solheim Cup at Killeen Castle, which will also host The AIB Ladies Irish Open again this year.

The latter two women’s events are part of the Ladies European Tour, who are supported by John Deere as the LET’s official supplier of golf course equipment and irrigation products.

“Our stated aim is always to keep the course in championship order,” says Royal St George’s club secretary Christopher Gabbey, who retires after this year’s tournament in July. “I think we can honestly say that since the last Open here in 2003 we’ve managed to raise the standard of the course yet higher, and our John Deere equipment is an integral part of this.”

In charge of this year’s pre-Open work is acting head greenkeeper Graham Royden and assistant Paul Larsen. The R&A retains an STRI agronomist, Alistair Beggs, for on-going support on its Open courses, and it was his advice that prompted the use of John Deere’s lightweight 8500 PrecisionCut fairway mowers over the last three years to facilitate lower cutting. Godfreys will also be supplying several additional 8500s in time for the work needed to achieve the Open look to the fairways, as required by the R&A.

In recent times the course has also moved to hand cutting the greens for ultimate accuracy and presentation. The 180C walk-behinds now being used mean the greenkeepers are really in touch with the surface, and according to Christopher Gabbey the greens have never looked and played better.

John Deere’s partnership with the LET underpins the preparations for the biggest tournament in women’s golf, The 2011 Solheim Cup match between the women’s professional teams from the US and Europe, which takes place at Killeen Castle in Ireland in September.

Killeen first bought a fleet of new John Deere machinery from Dublin Grass Machinery when the course opened nearly five years ago. “The company offered what I believed was far greater value for money than other manufacturers in terms of the machines’ capabilities and operational reliability, and the quality of the dealer’s aftersales service was matchless,” says course superintendent Mark Collins. “John Deere machines are quick and easy to interchange and fit well into the set-up here. I also know we can call on Dublin Grass at a moment’s notice, if necessary, for any size of replacement part, which is invaluable.”

The LET’s greenkeeping consultant, Julian Mooney, adds: “LET host venues have already benefited from the John Deere partnership, primarily as a result of the flexibility the agreement offers, including the provision of tournament support equipment. Dealer technicians and local John Deere product support managers also work closely with the resident mechanics to ensure all cutting units can achieve the highest quality of cut, in accordance with LET requirements.”

Meanwhile Robert Patterson, course manager at the Royal Aberdeen Golf Club, says that preparations for September’s Walker Cup – the biennial clash of top British and American amateurs – are also going well, with the course looking good even after the severe winter.

Royal Aberdeen has been using John Deere equipment for the past 10 years, and in late 2009 the club bought 21 mowing and utility machines from dealer Alpha Plus Groundcare on a five-year finance deal. Robert describes John Deere as “the whole package”, and one that enables him to produce high levels of course presentation throughout the year.

“Sand top-dressing on all areas of the course has kept the surfaces dry and firm,” says Robert of the course work to date. “Our Pro Gator and top dresser combination has proved invaluable, allowing us to dust the greens and approaches every week.

“In the spring, our 4320 compact tractor and our fairway dresser also let us treat all the fairways with sand in a single day. In addition, the lightweight 7500 fairway mowers have made a huge difference to the density and composition of the turf, as they easily follow the severe contours that we have, and leave a very tight finish, too.”