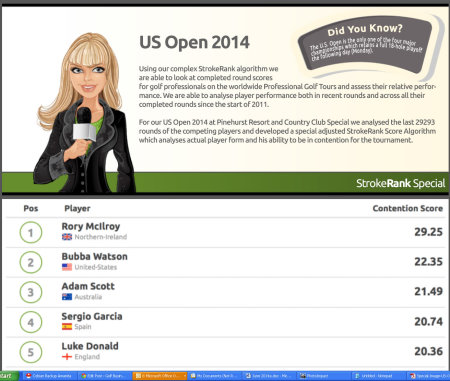 A new online form guide for golf which tracks the week by week performances of players on the world’s leading Tours has been launched.

Stroke Rank awards points to players in every tournament played each week on the professional Tours based on their score in relation to par and the average score of the field and then weighted by their finishing position in each tournament.

The system can be used as a guide to a player’s form heading in to a tournament. For the Masters in April, five of the players rated in Stroke Rank’s top ten finished in the top ten at Augusta.*

Developed by German online marketing specialist and scratch golfer, Falk von Wildenradt, Stroke Rank is designed to give an up to date guide to a player’s form. The system has been monitoring player’s performances since 2011 and builds an average of a player’s score for all rounds, their last 32 rounds, last 16 rounds and last eight rounds.

Stroke Rank follows players on the PGA Tour, the European Tour, the LPGA Tour, the Web.com Tour and the Champions Tour. It produces special form guides for the Masters, the US Open, the Open Championship, the PGA Championship and the Ryder Cup.

For this week’s US Open at Pinehurst, Stroke Rank monitored the last 29,293 rounds of the players in the field and used a special adjusted algorithm which factored in the all-time Stroke Rank of the players as well as their results over their last eight, 16 and 32 rounds. The top ten in the ranking is therefore: Rory McIlroy, Bubba Watson, Adam Scott, Luke Donald, Sergio Garcia, Miguel Angel Jimenez, Joost Luiten, Matt Kuchar, Justin Rose and Lee Westwood. To view the full US Open special please visit: http://www.strokerank.com/special-us-open.php.

“Stroke Rank is an excellent form guide for players going into Major Championships and can give a good indication of who might finish in the top ten,” said von Wildenradt. “While it is not possible to predict the winner with any degree of certainty, the system can give an up to date indication of who is most likely to be in contention.

“From an individual player’s perspective, Stroke Rank tracks their performances over their recent rounds and this can be set against their overall performance to assess whether they are playing better or worse than what is effectively their personal average.

“We have been working on developing this system for three years now and feel it is at the stage where we can launch it to the wider golfing community. It is designed to complement the existing world rankings and we see Stroke Rank as a useful tool for those who follow golf and perhaps enjoy the occasional flutter.”