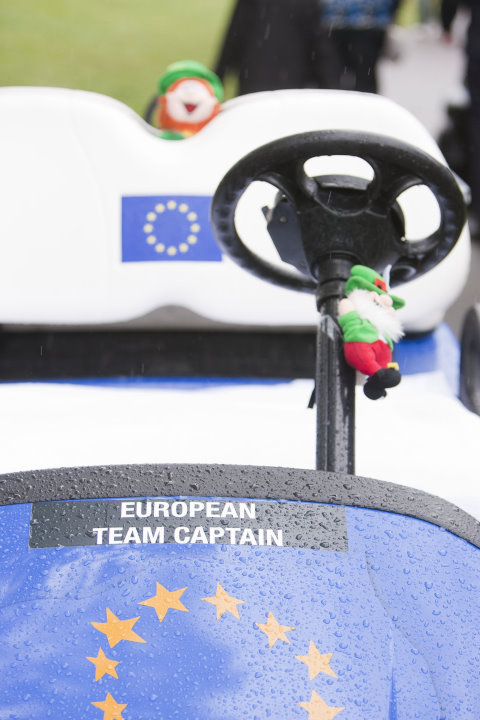 The vehicle was one of 179 Club Car golf carts supplied to the Solheim Cup at Killeen Castle by The Buggyman, Ireland’s leading golf car specialist, which also provided cars for the Ryder Cup at The K Club five years ago.

“We kept the assistant captains’ Club Car, which had been driven by Sandy Lyle and David J Russell, as a lucky momento,” explained Liam Ross of The Buggyman. “So when we were asked to supply vehicles for the Solheim Cup, we thought the European captain should have a Club Car that had a history of winning.

“Call it the luck of the Irish, if you will, but we like to think we had a small part to play inEurope’s victory.”

The Buggyman and Club Car’s role may have been more than just good luck.

The morning after the victory, Alison Nicholas told BBC Radio that a pep talk on board the golf car that took the final three singles players back out to the course after a weather delay may have helped turnaround their matches and deliver the dramatic victory.

“Suzann Pettersen, Caroline Hedwall and Azahara Munñoz all shared a buggy going back out and gave each other a pep talk,” said Nicholas. “They said, ‘Come on, we need our points.’

“As it turned out, it was an incredible last half an hour.”

It was also an incredible, albeit busy week for The Buggyman, which boasts a 3,000 strong fleet of Club Car vehicles in Ireland. It had 12 technicians on site at Killeen Castle to look after the vast fleet of two, four, six and eight-seater golf cars, 69 of which were used by television crews.

And with a 24-hour, on-call service on the playing days, the company’s team had their work cut out, keeping the Solheim Cup on track in heavy weather. But the 179 vehicles, two-thirds of which were electric-powered, proved themselves more than up to the task.

“These are such strong, robust vehicles that they keep going whatever the weather and conditions,” added Liam Ross. “A bit likeEurope’s Solheim Cup team.”

Club Car is also a Preferred Supplier to the Ryder Cup and the European Tour.