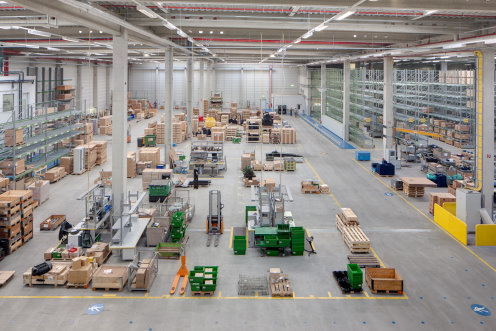 John Deere’s European Parts Distribution Centre (E-PDC) has officially inaugurated its new deconsolidation and packaging facility, a 23 million euro investment which will create additional employment for around 80 people. The new operation was established within just 10 months and will help to streamline parts logistics and further enhance the supply of parts to John Deere dealers and customers throughout Europe, the CIS, Northern Africa and the Near and Middle East (EAME).

“In light of the rapidly growing range of John Deere machines in all equipment divisions, we must continue to improve our supply of parts and merchandise,” says Fritz Rheindorf, Director Parts Operations, EAME. “Against a background of increasing freight tariffs and environmental considerations, this new facility will significantly improve the flow of parts and help to avoid unnecessary parts detours.”

For Agriculture & Turf Division President Markwart von Pentz, a seamless spare parts supply is a critical factor in the success of the company’s equipment businesses and a key criterion of customer satisfaction. Therefore, over the past two years the company has significantly invested in its parts operations worldwide. In addition to establishing the new deconsolidation and packaging facility in Bruchsal, John Deere recently opened two regional parts warehouses near Stockholm in Swedenand at Domodedovo (nearMoscow) inRussia.

The new 16,000 square metre deconsolidation and packaging complex in Bruchsal will serve as a hub for incoming parts, which will either complement outgoing parts shipments or be forwarded to storage areas at E-PDC. Due to logistics and handling improvements, the company expects to reduce delivery times even further, especially in peak harvesting seasons. The Bruchsal E-PDC currently stores more than 200,000 part numbers in a 62,000 square meter area.