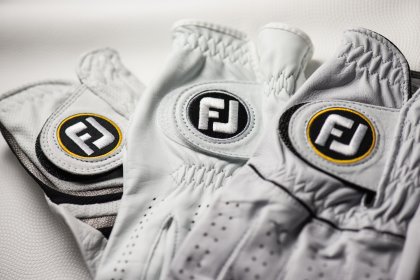 FootJoy has confirmed its clear leadership in the UK golf glove sector after announcing an increased market share figure of 54.4% for the value of all on and off course sales in 2015*.

Following the well-received launch of its extensive range of high-performance golf gloves, the leading brand has seen its market share (value) increase by 2.2% over the last two years, meaning its overall share now stands at almost seven times that of its nearest competitor (7.9%).  In total, over half of all golf gloves sold in the UK this year have donned the FJ mark, which represents more than five times the number of purchases of any other brand.

In the latest report that covers the period January – September 2015, the four gloves that have generated the most value have all been manufactured by FootJoy, with the WeatherSof® (17.8%) topping the table, followed by FJ’s GTxtreme® (9.2%), SciFlex Tour® (8.6%) and CabrettaSofTM(6.5%) models.  The recent figures also confirm that golfers have paid, on average, 12% more for FJ than other branded gloves*.

“We’re very proud of how well our glove range has performed this year and are already excited about new models for 2016, like the enhanced StaSof® and GTxtreme models, which have had a very promising reaction,” said Richard Fryer, FootJoy Sales & Marketing Director. “Our trade partners have once again played a significant role in the success of our gloves this year, embracing our eye-catching point of sale material and educating golfers on the benefits of each model.

“We’ve worked very hard with all of our retail partners in the last 12 months to help communicate the benefits of a high-performance golf glove, so it’s really pleasing to see that a growing number of golfers are willing to pay  that bit extra for performance and reliability,” added Fryer.

Whilst FootJoy gloves have proved a big hit for club golfers across the UK, the brand has remained the firm favourite for players on the major professional Tours. On the European Tour for instance, nearly four in ten star golfers (39.5%) rely on FootJoy gloves to perform, almost double the amount of players wearing the next placed brand.

“Feedback from top class Tour players continues to help with the development of new FootJoy gloves and the exposure that stars like Henrik Stenson and Adam Scott give the brand is invaluable,” continued Fryer. “Their continued use of FootJoy proves how well the gloves perform in pressure situations in a wide range of climates across the world.”

Whether it is the #1 Cabretta leather glove in golf, the all-new StaSof®, the vibrant colours of FJ Spectrum®, the customised cool fit of StaCool®, the powerful grip and moisture resistance of SciFlex® Tour, the precision fit of GTxtreme®, the long-lasting properties of WeatherSof® or the advanced wet-weather capabilities of RainGrip® and WinterSof®, FJ remains the overwhelming choice for golfers of all abilities around the world.