FootJoy, the #1 Shoe and Glove in Golf, has announced an impressive first half of 2016, extending its UK market-leading position with a value share of more than 53% in both the shoe and glove categories.*

Meanwhile, bolstered by the launch of its biggest and most high-performing line of women’s golf shoes to date, FootJoy has enjoyed an even greater dominance in the ladies market this year, with nine out of the top 10 best-selling models. Since the turn of the year, FootJoy has been responsible for a remarkable 74% of the value of all women’s golf shoes sold in the UK*. 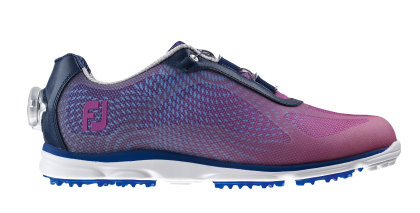 Worn by Ladies European Tour star Charley Hull, the emPOWER shoe has headlined FootJoy’s impressive rise in the women’s market. This one model alone representing one in five shoe purchases and generating almost a quarter of the value of all women’s golf shoes sold in 2016. Other notable performers in the women’s category included brand new shoes for this year like the eMerge and emBody, which have been responsible for 7.5% and 7.1% of shoes sold respectively.

The report also shows FootJoy has increased its market share in the golf glove category. The brand’s on course market share has grown to a staggering 64.4% of the value of all models sold – a figure 14 times larger than the nearest competitor*. The four gloves that delivered the most value in the UK over the last six months have all been made by FJ, led by the WeatherSof (15.8%) and followed by GTxtreme (8.8%), CabrettaSof (7.2%) and SciFlex Tour (6.2%).

“It has been a fantastic first half of the year for FootJoy and we’re extremely pleased with the reaction we’ve had to our 2016 range,” said Richard Fryer, FootJoy Sales and Marketing Director. “As well as the unrivalled product and the great people behind it, the latest figures really are a testament to FJ’s trade partners, who continue to go above and beyond when it comes to promoting the brand.

“Shoe models like FreeStyle in the men’s range and of course emPOWER in the women’s line-up really have taken innovation to a new level,” added Fryer. “We know performance is the most important factor whatever colour or style the golfer chooses from the FJ range – whether that is the Tour pro or the 28-handicapper.

“Helped by eye-catching point of sale, our range of high-performance gloves has also continued to resonate amongst all types of golfers this year,” said Fryer. “We’ve worked hard with our trade partners to fully educate consumers on the benefits of FJ gloves, including the importance of being fitted for the right size, and we look forward to working closely together in the years to come.”

Whether it’s the advanced feel of D.N.A., the athletic functionality of FreeStyle and HyperFlex, the reliability and consistent performance of the DryJoys family, the versatility of VersaLuxe, the all-round excellence of ICON Black or the superior comfort of Contour Series, FootJoy remains the overwhelming favourite for golfers of all abilities around the world.