On Tuesday 6th September 2016, The Belfry Hotel and Resort played host to the Tony Jacklin charity event, a venue where Jacklin twice captained the European Ryder Cup team. At the spiritual home of the Ryder Cup, Jacklin hosted an impressive roster of golfing legends and celebrities for a unique event to raise money for Rainbows Children’s Hospice and celebrate Tony’s remarkable career.

Less than a month before the 2016 Ryder Cup, Europe’s most successful captain returned to the venue where spearheaded Europe’s first victory for 28 years in 1985. Under his guidance, the European team claimed an impressive 16 ½ – 11 ½ victory across the iconic Brabazon course, before a 14 – 14 tie with the US team back at The Belfry in 1989. 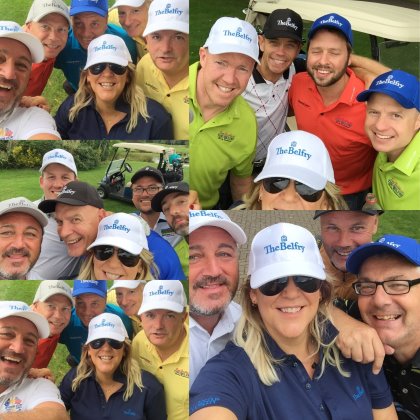 The event featured an array of Ryder Cup legends including Phillip Price, who famously beat Phil Mickelson in the final day singles on The Brabazon in 2002, Peter Baker who competed for the European side at The Belfry in 1993, and golfing legend Bernard Gallacher OBE, who captained the European Team that same year.

After their round, guests were treated to a champagne reception in The Belfry’s luxurious surroundings and a delicious three-course meal, before a charity auction helping to raise funds for Rainbows Children’s Hospice. The event, which was organised in conjunction with Champions (UK) PLC, was hosted by golfer and Sky Sports presenter Nick Dougherty.

Tony Jacklin stated: “I’m proud to host such a great event like this and raise some important money to support the incredible charity work of Rainbows. Having it here at The Belfry makes it all the more special. It’s a magical place for so many reasons. It holds a very special place in my heart and whenever I come back here, the memories of the 1985 Ryder Cup come rushing back me.”

Katie Niland, The Belfry’s Sales Director commented: “To have so many Ryder Cup legends and sporting celebrities here ahead of this year’s Ryder Cup, really builds up everyone’s excitement for the event. I think it’s great for Tony to come back here to the site of so many great golfing moments and raise some money for such a great cause.”

“We are proud of our ability to be able to successfully host such an incredible event here at The Belfry,” continued Niland. “The team work tirelessly to create and run bespoke events to suit the needs of every client and their event.”

The Golf Foundation is taking part in the Big Give Christmas Challenge 2021 to raise £4,000 in just one week for a special project helping children from different backgrounds to thrive through golf.

In recognition of the incredibly difficult challenges faced by the international golf tourism industry these past two years, the 21st annual IAGTO Awards focused entirely on rewarding the extraordinary efforts made by so many within the industry.

Golf clubs around the world were recognised for their ongoing commitment to fostering nature, conserving resources, taking climate action and strengthening communities at the 8th IAGTO Sustainability Awards, which were held online last night and delivered in partnership with the GEO Foundation for Sustainable Golf.