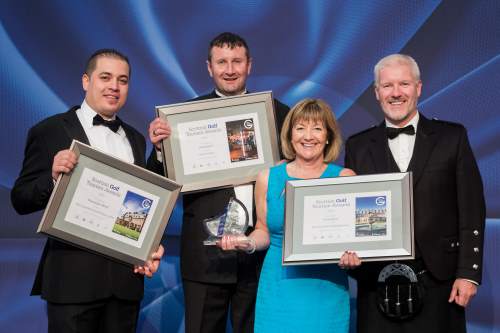 The 2017 Scottish Golf Tourism Awards Gala Dinner was attended by more than 350 guests from across the Scottish golf scene at the Trump Turnberry Resort on Thursday October 26th 2017.

There were 14 awards in total, chosen by voters from across the industry.

Gleneagles’ completed a treble at the event, also winning an award for the Best Pro Shop.

Blairgowrie Golf Club in Perthshire took the prize for Best Clubhouse, while The Carrick on Loch Lomond was awarded for Best Catering.

There were three prizes for courses that offered Value for Money. Fortrose and Rosemarkie Golf Club on the Black Isle peninsula won in the under £50 category, the Dukes Course in St Andrews won in the £50-£100 group and Castle Stuart Golf Links was deemed best value in the over £100 award.

Strathmore Golf Centre near Perth won the award for Best Course Under £50. The championship Dundonald Links Golf Course in Ayrshire, which played host to the men’s and women’s and 2017 Scottish Opens, took the prize for Best Course £50-£100. The Trump Turnberry Ailsa course, which was redesigned last year to great acclaim, was chosen as the Best Course over £100.

The Special Recognition Award for Services to Golf Tourism in Scotland was awarded to Fraser Cromarty, chief executive of Nairn Golf Club, who was credited as been instrumental in showcasing the Highlands as a first-rate golf destination.

Scottish Golf Tourism Week, which attracted more than 70 leading buyers from 39 countries to experience a range of Scottish golf assets, comes as the industry has set out ambitions to grow the value of the golf tourism in Scotland from £286m in 2016 to £300m by 2020.

Malcolm Roughead, chief executive of VisitScotland, said: “I’m delighted to see award winners from right across the country, which goes to underline the outstanding strength in depth of the Scottish golf tourism product. All of the award winners deserve huge congratulations on their success, as do all of the businesses who have taken part in Scottish Golf Tourism Week in 2017. With golf tourism playing a vital part of Scotland’s visitor economy it is vital that our tourism businesses continue to strive to deliver excellent customer service and keep these visitors coming back to Scotland, the Home of Golf, year after year.”