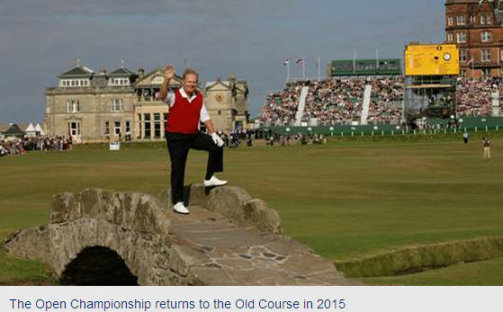 The Open will return to the Home of Golf in 2015 when the 144th Championship is played at St Andrews from 16-19 July. It will be the 29th time that golf’s oldest Major has been held over the Old Course.

South Africa’s Louis Oosthuizen won by seven shots with a 16-under par total of 272 when The Open was last held atSt Andrewsin 2010.

The R&A’s Chief Executive Peter Dawson said: “We are delighted to announce that The Open will be returning to St Andrews and the historic Old Course in 2015. St Andrews has proved time and again that it is perfectly equipped to host The Open and I am certain we will yet again see a worthy winner lift the Claret Jug. Players, spectators and officials alike will welcome a return to the game’s spiritual home and I fully expect that we will witness another thrilling Championship.”

Euan Loudon, Chief Executive of St Andrews Links Trust, said: “We are very much looking forward to welcoming The Open Championship back to the Links. There is always a special sense of anticipation when The Open is played on the Old Course and it promises to be no different in 2015. Almost every great champion in the game has played here and there is no more fitting celebration of the rich heritage of the Home of Golf than hosting golf’s oldest Major Championship.”

Other memorable moments include Nicklaus waving an emotional farewell from the Swilcan Bridge in 2005 as he ended his remarkable career (pictured).

Independent research, commissioned jointly by The R&A and EventScotland, found that the 2010 Open Championship delivered a combined £100 million benefit to Scotland, with £40.1 million entering the local economy.