St Andrew’s newest Restaurant Gets off to a Tee 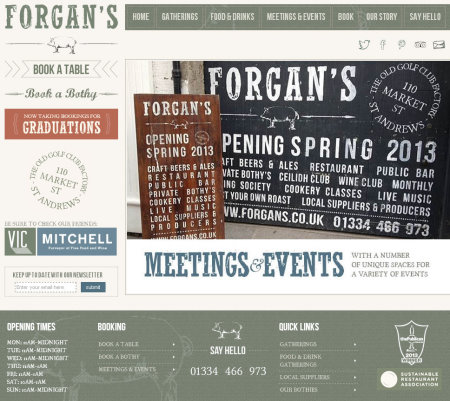 The renovation of a new restaurant and public bar was put out of bounds after a unique historical discovery was made – a set of clubs made by the world’s oldest golf manufacturer.

Bosses at Forgan’s, which is set to open in St Andrews tomorrow (17 May), now hope the find could prove to be an exciting one to golfing historians and they are already planning to have the clubs exhibited in the venue.

Forgan’s is being created in a warehouse building on the site of a former ‘cleek’ factory – the name originally given to number one irons – which sits behind the popular Mitchell’s Deli on Market Street.

The cleeks were the signature product made by Forgan which is reputed to be the oldest golf club factory in the world, dating back to 1860’s.

Bill Wright, a construction worker who is part of the team renovating the new Forgan’s venue, was drilling through the floor ready to put tables in place when his power tool suddenly jammed.

He started using his hands to dig three feet into the ground when he found four original Forgan’s golf club heads buried underneath.

He said: “I was just drilling through the floor beside the new bothy seating area when the drill jammed. I thought it was just a piece of harder stone or metal at first but when I started digging with my hands I could see that it was golf clubs.

“I was so surprised to see them, especially so far down under the flooring. They are a bit rusty and dirty but apart from that they are in good condition.

“It’s so amazing to find something so old and to think they could be very rare.

“I heard that the building was once used for making golf clubs but I didn’t think there would still be some hidden here. We’re all now keeping our eyes peeled for any other interesting finds.”

Michelle Nabal, General Manager of Forgan’s, said: “It’s really exciting to find these golf clubs. It gives a real sense of how old the place is and although we are not going to have a golf-themed venue, it reminds us of how important the sport is to St Andrews.

“The original factory dates back to the 1860s so who knows, the clubs could be well more than 100 years old. It’s just amazing to find a bit of the factory’s history while we are renovating.”

“There is already such a fantastic buzz about Forgan’s opening so this latest twist, which caused us to call a sudden halt to the renovation, is making everyone that little bit more excited about the opening next month.”

Forgan’s aims to put an emphasis on top quality “back to our roots” dining and entertainment, including weekend ceilidhs, as well as food and drink inspired by products from local artisan suppliers and producers.