Scotland’s Minister for Public Health, Sport and Wellbeing Joe FitzPatrick and European Solheim Cup Captain Catriona Matthew have unveiled a specially commissioned tartan during a visit to Lochcarron of Scotland in Selkirk to celebrate The Solheim Cup returning to Scotland.

The world’s biggest women’s golf event returns to Scotland, the Home of Golf for the first time in almost 20 years in September when it is played at the renowned PGA Centenary Course at Gleneagles, where 100,000 spectators are expected to cheer on the best players from Europe and the United States. 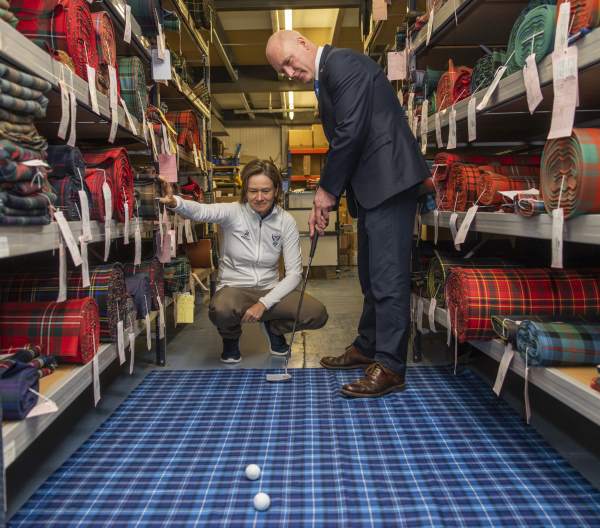 Backed by the Scottish Government, the event will promote the principles of equality, experience and innovation as Scotland leads the world in the development and promotion of women’s golf.

The Official Solheim Cup Tartan has been commissioned by VisitScotland and created by Lochcarron of Scotland, the world’s leading manufacturer of tartan, and comprises a blue, red, yellow and white design to mirror the colours on the flags of Scotland, Europe and the USA.

Solheim Cup stalwart Matthew and Mr FitzPatrick toured the factory of Selkirk-based Lochcarron of Scotland, where more than 700 authentic tartans have been made, before officially unveiling The Solheim Cup tartan.

Mr FitzPatrick commented: “I’m delighted to be able to unveil the official Solheim Cup tartan created by Lochcarron of Scotland, a globally renowned company based in the Scottish Borders.

The 2019 Solheim Cup will deliver a multitude of benefits to Scotland including promoting equality across sport and society, showcasing Scotland to the world and inspiring the next generation of young male and female golfers. It is also exciting how this event is engaging Scottish businesses and manufacturers such as Lochcarron of Scotland.

“Tartan and golf are two of Scotland’s most famous exports so it makes sense to combine them to commemorate the 2019 Solheim Cup.”

Matthew, who will captain the European side at Gleneagles after nine playing appearances, added: “It’s exciting to see the official Solheim Cup tartan and a reminder that the first tee shots will be hit at Gleneagles in a little more than five months’ time. I think the tartan looks fantastic and I love that it represents the colours of the European, US and Scottish flags. The Solheim Cup is always hugely competitive but played in great spirit between the two teams and I think the tartan represents that perfectly. I’m looking forward to as much home support as possible lining the fairways at Gleneagles to cheer on the European players and I hope we can win the trophy back from what we know will be a very strong American team.”

Following the creation of the design, it is planned that the tartan will be included in the official merchandise programme for The 2019 Solheim Cup and it may even feature in some of the team uniform during the competition itself.

Dawn Robson-Bell, Managing Director of Lochcarron of Scotland, which has also created tartans for the likes of Vivienne Westwood and Ralph Lauren, added: “We were thrilled to be asked by VisitScotland to create a tartan to commemorate The 2019 Solheim Cup. Tartan is historically a terrific way of promoting a unity and togetherness by incorporating colours from different families and clans therefore it is a perfect way to commemorate this match between two teams from Europe and the US. We look forward to seeing the tartan in the official stores during The 2019 Solheim Cup and we hope fans on both sides will like the design.”

The Scottish Government’s aspiration is that The 2019 Solheim Cup is the biggest ever European edition of the event and the most family-focused golf event in history with around 100,000 spectators expected at Gleneagles. Tickets are priced from just £10 for adults with children under-16 admitted free of charge. For more information visit www.solheimcup2019.com