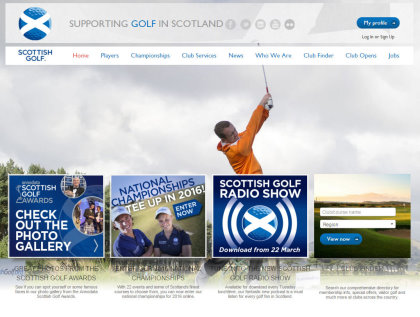 Golf tourism and major events in Scotland is vital to the future success of golf in the UK, according to a new report funded by The R&A.

The report, compiled by the Sport Industry Research Centre at Sheffield Hallam University, indicates that Scotland accounts for 20 per cent of added value to the UK economy from the golf industry, despite comprising just eight per cent of the population.

Scotland’s highly developed golf tourism and events offering, its worldwide reputation as Scotland, the Home of Golf and the country’s higher golf participation rate compared with the rest of the UK are cited as the key factors in Scotland’s strong overall performance within the UK golf industry.

The report also concludes that the golf industry in Scotland grew significantly in the three years from 2011 to 2014.  Increases in consumer spending, gross value added (GVA) and job creation during this period have been linked with the hosting of major events such as The Open and The 2014 Ryder Cup as well as investment in major golf resorts and a stronger economy.

Key findings from the report include:

Malcolm Roughead, Chief Executive of VisitScotland, said: “This report funded by The R&A shows the huge impact and influence that Scotland has in the golf industry not only in the UK but worldwide and the considerable value of the industry to Scotland’s economy.

“Scotland is undoubtedly the home of golf but it is also a country in which the game continues to thrive to this day. Golf in Scotland is an inclusive sport and that is reflected not only in the higher participation rates but in the sheer breadth of accessible golf courses across the country and the number of visitors flocking to Scotland to experience golf in the country where it began.

“The golf industry is a key driver for economic activity across a number of sectors including equipment, accommodation, food & drink and retail. It creates jobs and encourages spending and there is no doubt that Scotland’s strong golf tourism and major events portfolio is a significant factor in this success.”

Martin Slumbers, Chief Executive of The R&A, said, “Golf is one of the most popular sports in Scotland and throughout the UK as a whole. This report presents an extremely positive picture of the sport and highlights the substantial contribution it makes to the economy. It will enable us to measure growth and identify emerging trends in future which will be extremely valuable.

“The return of golf to the Olympic Games in Rio this summer heralds an important period for the sport and offers us a tremendous opportunity to build some additional momentum in promoting golf to a wider audience around the world. In Scotland, we can look forward to the return of The Open to Royal Troon in July which will once again place Scottish golf in the global spotlight.”

Hosting major golf events in Scotland is a key part of Scotland’s national events strategy, Scotland The Perfect Stage. VisitScotland leads Scotland’s investment in the marketing of golf tourism and the support of major golf events, including The 2014 Ryder Cup and the recent successful bid for The Solheim Cup in 2019. The organisation has also forged close links with The R&A through the regular staging of The Open in Scotland as well as supporting a multitude of other events such as The Senior Open Championship, Ricoh Women’s British Open and Aberdeen Asset Management Men’s and Ladies Scottish Opens among many others.

VisitScotland continues to look at innovative ways of promoting golf tourism in Scotland including attending overseas events, marketing campaigns and the support of the inaugural Scottish Golf Tourism Week due to take place in St Andrews in October 2016.

The full report can be downloaded from www.randa.org

*According to figures quoted in 2011 study into the value of golf by KPMG.