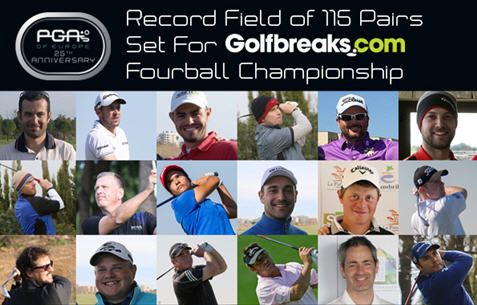 A record 230 PGA Professionals will descend on Lumine Mediterránea Beach & Golf Club in the Costa Daurada region of Spain this week for the 2016 edition of the PGAs of Europe’s Golfbreaks.com Fourball Championship.

From the 10-12 February PGA Professional Pairs from across the Association’s Member Countries will compete across 54 holes of golf for a record prize fund of €53,500 in the popular Fourball format that has grown to be a hugely competitive Championship.

2015 Champions Matthew Cort and Craig Shave (PGA of Great Britain & Ireland) will return to try to defend their title but will be joined by some of the best PGA Professionals in the world.

The son and nephew of Spanish golfing legend Seve Ballesteros, Javier and Manuel Ballesteros, join together as part of a strong representation by the home PGA with over 70 professionals in the field.

This autumn the Melanoma Fund is back encouraging golfers to get skin savvy, by carrying out a monthly skin check to help avoid late detection of melanoma, a problem more prevalent in men.

Sefton Council in Lancashire has launched a public consultation on ways to improve the course and facilities at Southport Golf Links.

Due to mounting pressure from the global Coronavirus pandemic, the Grounds Management Association announces that it has taken the decision to move SALTEX to 3-4 November 2021, from its planned Spring dates (3-4 March)