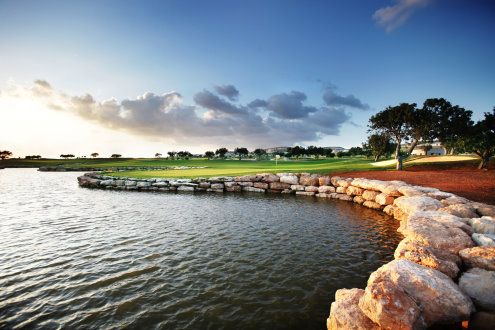 Ryanair’s decision to make Paphos, Cyprus, one of its international hubs will directly benefit visitor numbers at Sir Nick Faldo’s ‘Mediterranean Masterpiece’, Eléa Golf Club, situated just 10 minutes from the airport, according to senior figures at the award-winning development.

The budget airline begins 14 new routes to and from Paphos in April and May, including services from London Stansted, Memmingen Munich, Frankfurt Hahn, Stockholm Skavsta and Oslo Rygge, and Eléa Estate – voted the No. 1 golf course in Cyprus by top100golfcourses.co.uk – forecasts that travelling golfers will form a healthy part of the estimated 600,000 people expected to use the new services every year.

Andreas Anastasiou, General Manager of Eléa Estate, said: “There is little doubt Eléa Golf Club, and the other golf courses in the Paphos area, will benefit from Ryanair’s impending new services. With 80 new flights a week being operated to and from Paphos we anticipate an increase in tourists wanting to play golf and both our location and reputation asCyprus’ number one golf course positions us perfectly.”

Since opening in October 2010, Eléa Estate has received a host of significant awards including being named one of the Top 10 New International Golf Courses of 2010 by golf.com; Best International Leisure Development 2011 and Best Golf Development in Europe 2011 at the pretigious International Property Awards.

Eléa Estate is also currently offering various exclusive homes off plan, designed by Ergo 7 and with interiors created by London-based architectural design experts MKV. In the future it will also have a boutique hotel supported by a range of dining options, traditional village square and extensive spa facilities.

Nasos Hadjigeorgiou, Tourism Manager for Paphos Regional Board of Tourism said: “Ryanair will play a special role in stimulatingCyprus’ European markets. Using theUKas an example, with four flights per week from Stansted to Paphos – an annual capacity of approximately 37,000 seats – this represents very positive news for the island and our golf developments, such as Eléa Estate.

“Ryanair’s new flights bring a new era to the way we promote tourism in Cyprus. For the last 30 years, 80-90% of our marketing was to the trade and only 10-20% to the final user. With thousands of air seats now available to end users via web-based booking systems, travellers can now individually and dynamically prepare their own trips to Cyprus. We will need to adapt the way we work to support this, by increasing our marketing and promotional activities direct to consumers.”