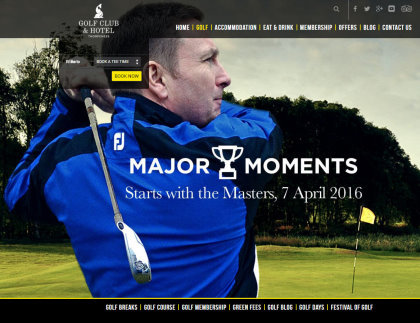 A new golf challenge is aiming to help amateur golfers feel like a Major Champion. The Major Moments Series is an interactive competition where amateur golfers compete against the sport’s biggest names during the season’s four Majors.

The series is the brainchild of Thorpeness Golf Club and Hotel, one of the leading golf resorts in Suffolk.

Brad McLean, general manager at Thorpeness Golf Club and Hotel, said: “The four Major Championships are the most exciting weeks in our golf calendar and every golfer has dreamt of slipping on the Green Jacket or holing the winning putt at The Open. We wanted to capture some of that special magic and give ordinary amateur golfers the chance to feel like a Major Champion.”

The Major Moments Series @Thorpeness enables any golfer to enter a tournament on any of the 16 days a year when the world’s best professionals compete for the four Majors.

The aim is for entrants to shoot a lower nett score than the gross equivalent posted by the current leader on that day of the Majors.

The winning golfer enjoys their ‘Major Moment,’ picks up an individual prize for the day, and is entered into a pool of winners eligible to win a place at a season ending Major Moments Grand Slam tournament at Thorpeness in October.

How does it work?

The nett score of series competitors is calculated from their Stableford score and compared to the leaderboard from that day’s Major play.

A live leaderboard for the Major Moments Series will run in the Thorpeness clubhouse.

The results will be published on Thorpeness’ website and on its Twitter and Facebook accounts throughout the series – including during play – so that competitors accessing social media on the course know the scores they have to beat.

The golfer shooting the lowest nett round during each Major week wins a place in the 18-hole Major Moments Grand Slam tournament on October 30th, 2016 – including free accommodation, golf, a three course dinner and cooked breakfast.

Christine Langford, head professional at Thorpeness Golf Club, said: “The great thing about this series is that golfers have 16 chances to feel like a Major Champion.

“The excitement runs throughout the Summer and signs off with a Grand Slam style finale and a free golf weekend away. We look forward to welcoming golfers to Suffolk and hope that many are successful in creating their own Major Moment.”

It is considered one of the finest coastal heathlands in Southern England and winds through pine and silver birch trees with fairways bordered by heather and gorse bushes.

For more information about the Major Moments Series and how to enter, visit: http://www.thorpeness.co.uk/major-moments.aspx

Canterbury Golf Club in Kent has relaunched its Second Club Membership, an innovative form of club membership that provides provide similar playing rights to the club’s full membership for those who are already members at another club.

OCEANTEE has announced its first official sponsorship of a European Tour event when it links up with the tour swings into Cyprus in November.