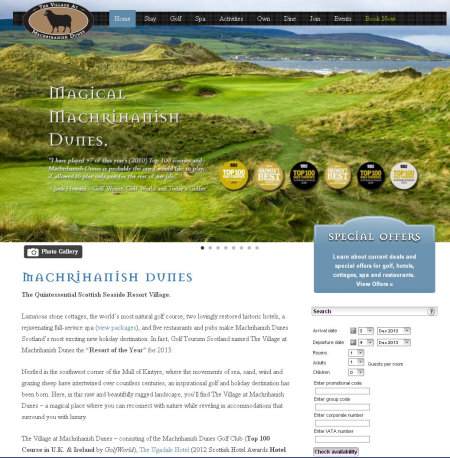 The Village at Machrihanish Dunes was the winner of two top awards at the Golf Tourism Scotland Excellence Awards, which were presented at the group’s annual dinner held on Friday, 22 November.

“We couldn’t be prouder of what the team at Machrihanish Dunes has accomplished in a few short years,” said David Southworth, President and CEO of Southworth Development. “It’s an honour and privilege for The Village at Machrihanish Dunes to win these two prestigious awards, particularly as it was our peers voting, most of whom have first-hand knowledge of all the historic and famous courses, hotels and resorts in Scotland.”

These latest Golf Tourism Scotland awards add to the growing list of accolades the resort has received. Also in 2012, Machrihanish Dunes took second place in Golf Inc. Magazine’s global ‘Development of the Year’ competition, won the Scottish Alliance Award in the Enterprise category, and was named the top eco course in the world by ABTA Magazine.

Machrihanish Dunes Golf Course, a 7,175-yard links course that was designed by Scotland’s David McLay Kidd, opened to critical acclaim in 2009. The first 18-hole links course in the UK to earn certification by Golf Environmental Organization (GEO), the course was the first links course built in Western Scotland in 100 years, and the first ever to be built on a Site of Scientific Interest (SSSI).

In the construction of the course only seven of the course’s 259 acres were altered, and Machrihanish Dunes maintains strong environmental and sustainable practices, including no use of chemical pesticides or herbicides and no mechanical fairway irrigation. At Machrihanish Dunes, the black Hebridean sheep continue to act as ‘natural lawnmowers’ and tame the rough as they have been doing for hundreds of years. Machrihanish Dunes Golf Course is consistently named to the lists of best golf courses by the likes of Golf World, Golfweek, LINKS and National Club Golfer magazines.

The resort’s two historic hotels, The Ugadale Hotel in Machrihanish and The Royal Hotel in downtown Campbeltown, were fully restored and reopened in 2012. Both hotels have earned luxury four-star status, having undergone a rigorous review process by VisitScotland.

Since its opening in 2012, The Ugadale Hotel has earned a slew of awards, including ‘Best New Hotel,’ ‘Best Golf Hotel,’ and ‘Best Small Hotel’ from the Scottish Hotel Awards and Golf Tourism Scotland, while The Ugadale Cottages have themselves earned the TripAdvisor Certificate of Excellence for the past two years running.

The Ugadale Hotel features 22 rooms and suites, many with stunning golf course and ocean views, the boutique Serenity Spa, a fitness center, and dining options that include The Kintyre Club for more formal dining and The Old Clubhouse Pub for a casual bite.  The Royal Hotel offer 23 rooms, all overlooking picturesque CampbeltownHarbour, along with the lively Black Sheep Pub and a fine-dining restaurant, the Harbourview Grille.

The Village at Machrihanish Dunes www.machrihanishdunes.com