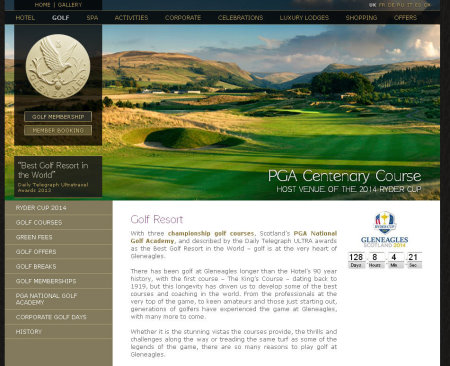 The Gleneagles Hotel was this week named ‘Best Golf Resort in the World’ for the third year running at The 2014 UltraTravel 100 Awards.

The prestigious awards were voted for by UltraTravel readers, with other shortlisted properties including La Manga Club in Spain; PebbleBeach in the US; St Andrews; and Sandy Lane in Barbados.

The award comes as the Perthshire resort prepares to host the 40th Ryder Cup Matches from 26-28 September 2014, and celebrate its 90th anniversary on 6 June.

Bernard Murphy, Gleneagles’ General Manager, commented on the win: “It’s a tremendous honour to have been voted the world’s best golfing resort, and I’m very grateful to all those who voted for Gleneagles, and the staff whose hard work made this achievement possible. It’s a boon for Gleneagles, but also for Scottish golf tourism in general. We will continue to strive for excellence in all we do throughout this very exciting year, as we prepare to welcome golf’s greatest players in September for The Ryder Cup.”

Gleneagles is home to three award-winning courses – The King’s, The Queen’s and The PGA Centenary course – as well as Scotland’s PGA National Academy for golf tuition. The resort’s first golf courses, designed by James Braid, opened in 1919, five years before the hotel opened in 1924.