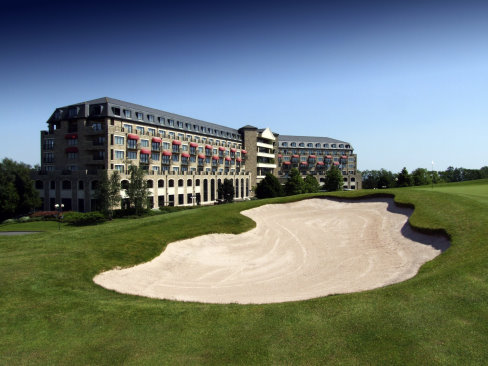 The Celtic Manor Resort has been voted the UK’s Best Conference Hotel for the fifth year running by industry experts. The five-star resort in South Wales topped the poll once again in Conference & Incentive Travel magazine’s Hot List Awards.

The Gold Award caps another momentous year for the venue which hosted such a memorable Ryder Cup in 2010. The venue beat off some strong competition for the prize withLondon’s Savoy Hotel taking the silver award and The Grove in Hertfordshire claiming bronze.

Celtic Manor had already in 2011 been named Europe’s Golf Resort of the Year by the International Association of Golf Tour Operators; UK Sport Venue of the Year at the Sport Industry Awards; and Best UK Hotel at the Meetings & Incentive Travel Awards.

With 400 bedrooms in two hotels, a large and versatile convention centre, three championship golf courses, five restaurants, a separate country inn, two luxurious spas and health clubs and a host of other leisure activities, The Celtic Manor Resort occupies a unique position in the marketplace.

Its recent succession of top awards has not prevented the resort from improving its conference facilities this year with new digital signage and a breakout lounge for lunch and refreshments.

The resort has also further enhanced its offering to corporate clients in 2011 with the opening of new treetop high ropes and adventure golf activities, which are ideal for team-building exercises.

Celtic Manor Chief Operating Officer Ian Edwards said: “We are delighted to receive this prestigious award, confirming our position as the best conference hotel in theUK. It is particularly satisfying that this comes as the result of a reader poll conducted with the industry experts, who are our clients. For them to vote for us to receive this award five years in a row is something we are very proud of.

“Having just celebrated the first anniversary of a Ryder Cup which many described as the greatest ever, it is very reassuring to know that we are still more than meeting the expectations of our customers and winning prestigious awards like this one. The award is a reflection not only of the excellent facilities at The Celtic Manor Resort but also the dedication to customer service of our entire staff.”

The resort’s convention centre – one of the largest hotel facilities of its kind in Europe– houses the Caernarfon Suite which can seat 1,500 delegates for a keynote lecture or 900 dining guests for a gala dinner. An additional 31 syndicate and meeting rooms with break-out areas can cater for every event from a small meeting around a table to large presentations for hundreds of people.

Celtic Manor offers an abundance of other meeting spaces including its latest addition – The Newbridge on Usk, an idyllic, riverside country inn with six bedrooms – and leisure incentives include the spectacular Twenty Ten Course and the luxurious Forum Spa.