In total, all 11 eligible members of the European Tour Properties network of world class golf venues feature in the inaugural ‘Top 100 Golf Resorts in Continental Europe’ published in the November issue of the magazine.

Regarded as the authority on European golf courses and resorts, Golf World compiled a team of seven international experts to create its first ever listing of continental Europe’s resorts. Courses, accommodation and both on and off-course facilities were all taken into account.

And with all of its eligible venues making the Top 100, the ranking is a powerful endorsement of the world class quality within the European Tour Properties portfolio.

Terre Blanche, situated in the hills of Provence and close to the French Riviera, is a breath-taking resort set in the style of a Provençal village with a five-star Leading Hotel of the World, luxurious spa and an outstanding golf academy which has been awarded European Tour Performance Institute status. 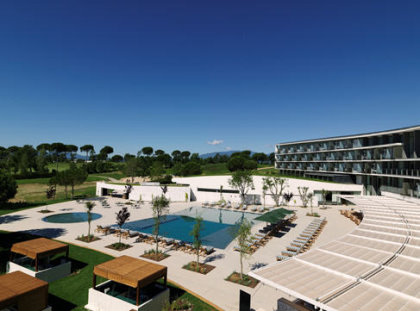 PGA Catalunya Resort, on the doorstep of Barcelona and the beautiful beaches of the Costa Brava, features two courses, including The Stadium Course, Spain’s No.1 ranked golf course. Its top three position in Golf World’s new listing is just reward following a €33 million investment in the new five-star Hotel Camiral, which opened in summer 2016.

Chris Bertram, Editor of Golf World’s Top 100 Golf Resorts, said: “Anyone who visits either venue would agree they are two of the very finest resorts on mainland Europe.

Quinta do Lago, Portugal, which also made the top 10 in Golf World’s list, features the recently revamped North Course, and has become a leader in Europe for luxury lifestyle, leisure and entertainment.

Other European Tour Destinations to be ranked among the top 25 in Europe are Montgomerie Maxx Royal, Turkey (13th) and Troia Resort, Portugal (20th), one of the most recent additions to the European Tour Properties network.

Le Golf National, venue of The 2018 Ryder Cup, which has undergone an extensive course renovation and upgrade to its on-site hotel and clubhouse facilities, was ranked 23rd.

“For all 11 continental European resorts in the network to make this prestigious list is both excellent news and an indication of the extraordinary professional commitment of the venues and their teams to delivering world class golf and hospitality.

“Staying and playing at a member of the European Tour Properties network means enjoying an experience that comes with a stamp of tournament quality – and we’re delighted this has been recognised in Golf World’s new rankings of the best golf resorts in continental Europe.”