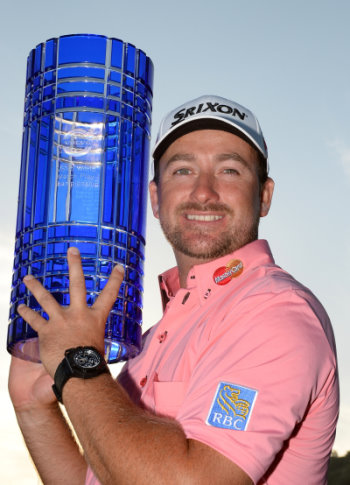 The European Tour has announced a partnership between Golfbreaks.com and the Volvo World Match Play Championship which will give more than 500,000 golfers across the United Kingdom the chance to buy discounted tickets for the 50th anniversary of the tournament, held at London Golf Club from 15-19 October.

The International Course will for the first time stage the €2.25million tournament, which pits 16 of the world’s leading players – including defending champion Graeme McDowell and his 2014 Ryder Cup team-mate Henrik Stenson – against one another in head-to-head match play.

The elite field will qualify via a revised criteria and will be split into four groups of four in the group stages, before the leading two players from each group proceed to the knock-out phase, which will be played over the weekend.

Golfbreaks.com customers are entitled to a £10 discount on the season ticket price, and £5 on any one day tickets. Full details of how to take advantage of these discounts are available online here: http://www.golfbreaks.com/volvo-world-matchplay-championship

Keith Waters, The European Tour’s Chief Operating Officer, said: “We applaud Golfbreaks.com for their support and this superb initiative in encouraging golfing fans to attend what has undoubtedly become one of the highlights of The European Tour International Schedule.

“The two editions of the European Open held at London Golf Club in 2008 and 2009 drew fantastic crowds, and I’m sure this partnership will help ensure another tremendous turnout during the week of the Volvo World Match Play Championship.”

Keith Mitchell, Marketing Director of Golfbreaks.com, said: “It is great to have another high-profile event in the UK so close after The Ryder Cup, giving golf fans another chance to see their heroes in action.

“With well over 500,000 golfers booking either a holiday or tee time through Golfbreaks.com and Teeofftimes.co.uk, we are delighted to be able to offer discounted tickets to our loyal golfing fans and we look forward to seeing many of them in person at the tournament this autumn.”

Golfbreaks.com was started by Andrew Stanley in 1998, with the objective of saving golfers time and money by organising their golf trips. The company offers more than 2,000 resorts and courses across the United Kingdom, Europe, USA and worldwide, with nearly 200,000 golfers using the service last year.

Golfbreaks.com also runs the UK’s leading online tee-time booking service, Teeofftimes.co.uk – which last year sold more than 300,000 rounds of golf – and the company also branched out into spa days and breaks in 2010 with the launch of BookaSpa.com. The company now enjoys a turnover of almost £35m, and employs 140 staff in its Windsor office.

The Volvo World Match Play Championship was begun by Mark McCormack and IMG in 1964, when Arnold Palmer took the title at Wentworth Club. Since Volvo became the title sponsors in 2009, the event has evolved by securing a world-class field via qualification on merit and revising the format.

Last year, the Championship was the first full European Tour event to be played in Bulgaria, with McDowell beating Thailand’s Thongchai Jaidee in the final at Thracian Cliffs.