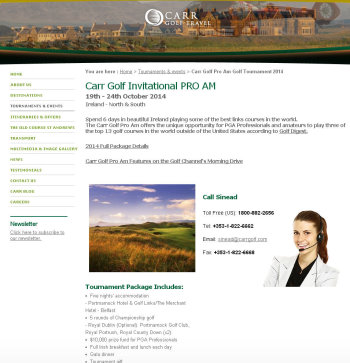 Carr Golf Travel, celebrating 25 years in play this year, have announced the program for its 2014 Pro Am, which will be held in Dublin and Belfast, Northern Ireland. Ireland’s leading golf company, which runs several successful events each year, also runs the renowned World Invitational Father & Son Golf Tournament.

The 2nd Carr Golf Invitational Pro Am is being played over four rounds, staged at three of the world’s best golf links courses. After an optional practice round at Christy O’Connor’s home club at Royal Dublin Club, the first round of the event will be staged at Portmarnock Golf Club.

Portmarnock Golf Club has recently been rated #1 in Ireland by Golf Digest Ireland and played host to the Walker Cup, numerous Irish Open’s and the 1960 Canada Cup. The following three rounds will be hosted in Northern Ireland, one round being played at Royal Portrush Golf Club and two rounds played over the Links at Royal County Down Golf Club.

Royal Portrush Golf Club is consistently rated one of the top 20 golf courses in the world and has hosted the British Open, Irish Open, Senior British Open, Walker Cup and a number of British Amateur championships, including this year (2014) staging. JB Carr won one of his three Amateur Championships at Royal Portrush in 1960.

Royal County Down Golf Club is currently rated #4 in the world and will host two of the tournament rounds. Royal CountyDown has hosted the Walker Cup and a number of British Amateurs and the Senior British Open. It is clearly the Jewel in the crown.

Twenty invited teams of four(4) will play in the Pro Am over four days, 20th to 23rd October, 2014. The PGA professionals play for $10,000 in prize-money and the Amateurs play for the Tipperary Crystal Trophy. The group will stay two nights in Dublin at the Portmarnock Hotel & Golf Links and three nights in Belfast at the Europa Hotel. The tournament program includes 5 nights’ accommodation, 5 rounds of championship Links golf, Luxury transport throughout the event, breakfast and lunch daily, $10,000 in prize-money, tournament gift for the Amateurs, welcome reception at Portmarnock Golf Club, a gala dinner and tournament concierge throughout. The cost of entry is £2,000 per amateur, and this includes the PGA Professional travelling complimentary.