The Els Club Desaru Coast has further reason to celebrate following the announcement the Valley Course has received the accolade, ‘Best New Course in Asia Pacific’ at The Asian Golf Awards. The recognition adds to the tally of awards The Els Club Malaysia brand has received in recent years, which also includes The World Golf Awards, ‘World’s Best New Course’ and an unprecedented ranking inside Golf Digest’s 100 Greatest Courses (#83). 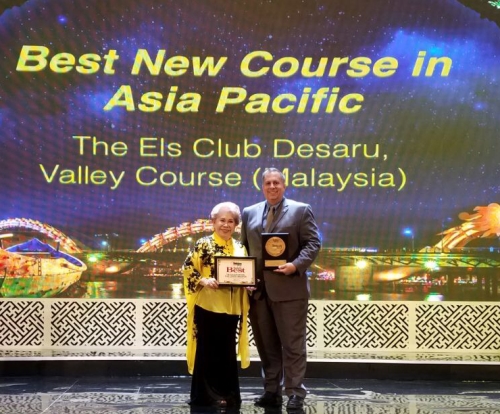 In their decision, the awards owners, the Asia Pacific Golf Group, considered architecture, golfing experience and overall customer service. Thousands of votes cast determined the nominees in 48 categories representing the ‘Best Among the Best’ of the Asian golf industry – a further illustration of the success achieved by The Els Club Desaru Coast.

“Any time you receive an accolade of recognition it is a time for celebration,” said Zainal Ashikin, Executive Director and CEO of Desaru Development Holdings One. “We knew Ernie and Vijay had created a real masterpiece with the Valley Course, which is further validated with today’s award.

“The Els Club Malaysia brand prides itself on its quality and commitment to delivering world-class experiences each and every day. I strongly recommend golfers come and try it for themselves if they have not yet had the chance.”

On the coastline of the tranquil Desaru region, The Els Club Desaru Coast – Valley Course has established itself as a new contender on the international golf scene. Collaboratively designed by four-time Major Champion, Ernie Els, and World Hall of Famer, Vijay Singh, this championship course is nothing short of sensational.

With the undulating landscape and white sandy bunkers meticulously placed throughout, the course guarantees an enthralling 18 holes in paradise. The condition and quality of the course is pristine and, being managed by Troon Golf, the world’s leading golf management group, every detail is meticulously catered to.

“The Valley Course is an exceptional golf course and one that is unique in every sense of the word,” commented Thomas Rubi, President Ernie Els Design. “With both The Ocean and The Valley Courses, Desaru Coast has the potential to establish itself as a major new golf destination in the region. Today’s award is further evidence of that.”

Headquartered in Geneva, Switzerland and Dubai UAE, Troon’s International division is committed to developing Troon’s presence throughout the world. This rapidly expanding division now oversees operations at 44 courses in 16 countries including Australia, the United Arab Emirates, England, Russia and Spain with further expansion planned across all regions. www.Troon.com