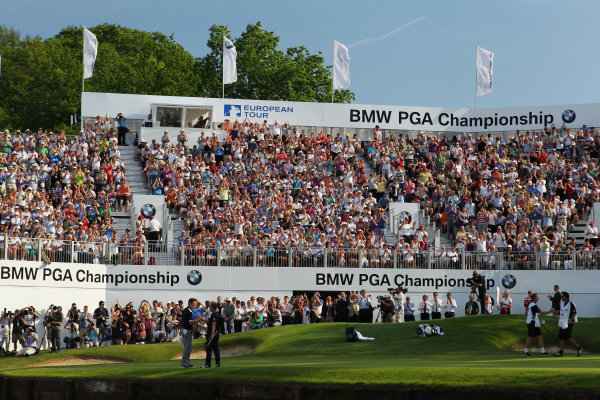 This year’s champion will receive €791,660, which is over €40,000 more than England’s Luke Donald collected for his second consecutive BMW PGA Championship success in 2012 when he finished four strokes clear of joint runners-up Paul Lawrie of Scotland and Donald’s compatriot, Justin Rose.

The total prize fund has grown by €750,000 – and the first prize by just over €125,000 – in the eight years since BMW became a Partner in the PGA Championship at Wentworth Club in 2005, when then US Open Champion Angel Cabrera picked up the first prize of €666,000 after claiming a two shot victory over 2014 European Ryder Cup captain, Paul McGinley.

George O’Grady, Chief Executive of The European Tour, said: “The BMW PGA Championship is our Tour’s flagship event and it is important that the prize fund reflects that status. This increase to €4.75 million, offering a cheque of just under €800,000 to the 2013 champion, underlines the importance of the Championship as a key component in the season-long Race to Dubai.”

Tim Abbott, Managing Director of BMW UK, said: “We value our long-term partnership with The European Tour and Wentworth Club in helping to develop the BMW PGA Championship as one of the most prestigious events in world golf. The increase in the prize fund to €4.75 million reflects this status and we look forward to another successful edition of the Championship in May.”

The 2013 BMW PGA Championship will boast one of the strongest fields on The European Tour International Schedule, with many of the world’s best players in action over the famous West Course at Wentworth Club. All four days will be broadcast live on Sky Sports with highlights on BBC.

The Championship is set to deliver an enhanced spectator experience this year as Europe’s Ryder Cup Team, triumphant from the ‘Miracle in Medinah’, regroup for the first time competitively on British soil at Wentworth Club.

A superb package of fun, celebrity-spotting and world class golf will take place over a six-day period, from May 21-26, representing outstanding value for practice day, celebrity pro-am day and the four rounds of the event. Advance ticket and hospitality packages, including 18th green grandstand seating and limited on-site parking, are available now on www.europeantour.com/tickets. Children aged 16 and under will be admitted free of charge if accompanied by an adult ticket holder.

This year sees the introduction of a new Park and Ride system to help facilitate the flow of traffic. The system will operate from two locations – one near Sunningdale, carrying traffic from the West (M3 and M4) and one at the Review Ground, WindsorGreatPark, which is East of the tournament venue close to the M25. Both parks will operate free shuttle bus service to Wentworth Club every five minutes with the journey time taking around ten minutes and allowing easy access to a new Welcome Entrance through the TentedVillage.