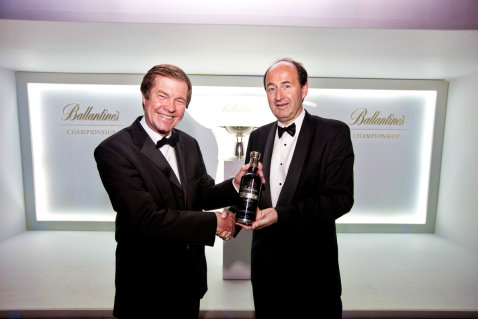 The presentation of the ultra-rare blend was made in Seoul, Korea prior to the start of the fifth anniversary edition of the €2.2 million Ballantine’s Championship, which takes place at Blackstone Golf Club this week.

Only 100 bottles of the 40 year old blend, which was launched in Korea earlier this year, will be made available annually, and O’Grady was presented with one in recognition of The European Tour’s milestone anniversary.

It is 40 years since the first European Tour event, the Open de España, was played in April 1972, won by Spaniard Antonio Garrido.

O’Grady said: “As we mark an important anniversary in The European Tour’s history this month it is important that we recognise that contribution made by all of our sponsors over the years and we are delighted to be able to toast this occasion with Ballantine’s, who have put on a superb event this week.

“The Ballantine’s Championship, now in its fifth year, in many ways represents the growth of The European Tour, which visits many different countries around the world, and we are thankful to sponsors such as Ballantine’s for supporting us in doing this.”

Next month's Open Championship at Royal St George's Golf Club in Kent will be able to host up to 32,000 each day following the latest government advice on staging outdoor events.