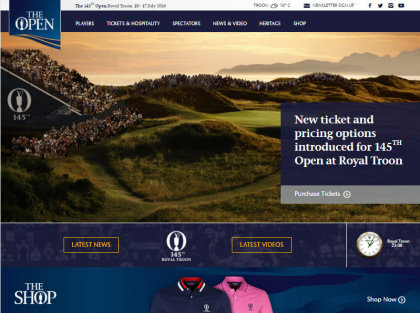 New ticket and pricing options have been introduced for The 145th Open at Royal Troon, including a new twilight ticket and a reduction in the price of an advance purchase adult daily ticket.

The world’s leading golfers will compete to become Champion Golfer of the Year at the historic Ayrshire links from 14-17 July 2016.

Twilight tickets are being introduced for the first time, offering entry to the course from 4pm onwards on Thursday and Friday of Championship week for £25.  A limited number are available and spectators are urged to purchase in advance.

Tickets for the Championship are now on sale with the price of an adult daily ticket, purchased before 31 May, changing to £60, which is £10 less than in 2015, and £80 thereafter.

Martin Slumbers, Chief Executive of The R&A, said, “We recognise that many people have work commitments during the week and the new twilight tickets will give them an attractive option to attend The Open. We have also made some changes this year to encourage and reward spectators who purchase tickets early which helps us with planning the services and facilities we offer at the Championship.

“The Open is one of the world’s major sporting events and is the highlight of the golfing calendar for many thousands of golf fans. Our aim is to deliver an outstanding experience for spectators and to ensure the Championship remains affordable and accessible.”

Children aged under 16, who are accompanied by an adult, receive free entry to The Open. For youths, aged 16-21, a daily ticket costs £25 before 31 May and £30 thereafter.

Spectators can look forward to another enthralling Open Championship as Zach Johnson defends the title he won in dramatic fashion in a play-off with Louis Oosthuizen, the Champion Golfer of the Year in 2010, and Australia’s Marc Leishman at St Andrews.

This will be the ninth occasion on which The Open has been played at Royal Troon, with players such as Bobby Locke, Arnold Palmer, Tom Weiskopf and Tom Watson among its illustrious list of Champions. America’s Todd Hamilton won The Open the last time it was held there in 2004 after a play-off with Ernie Els.

Christmas gift wallets and cards are available for those who would like to make a special gift of tickets to The Open.

To purchase tickets or for more information, visit TheOpen.com