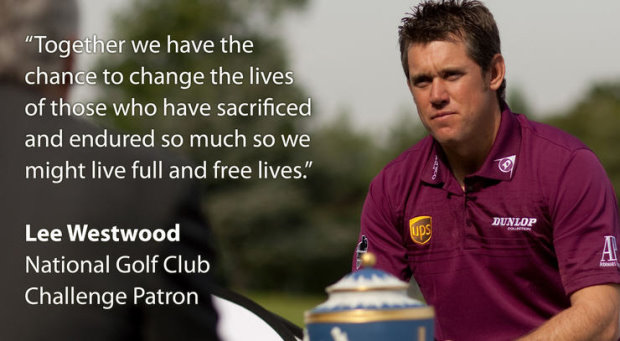 Lee Westwood OBE has thrown his weight behind the 2015 National Golf Club Challenge amateur charity golf tournament, which will once again unite hundreds of golf clubs throughout the UK to compete against each other, while at the same time fund raise in support of Help for Heroes.

Lee has been a Patron to the National Golf Club Challenge, from its inception in 2010 – giving his time and influence on a number of occasions to help raise the profile of the popular national charity golf competition.

“I’m proud to be Patron to the National Golf Club Challenge” Lee commented, “It’s the best way I can think of to bring the Great British golfing community together to raise funds for such a worthy cause. Our Armed Forces are real British Heroes and do a great job and deserve our help and support.”

Lee went on to say “It’s important to remember that many of the brave individuals who have suffered life-changing injuries while in the service of our country, will require ongoing support for a number of years. So it’s great to see the National Golf Club Challenge enter its sixth year in continuing to fundraise for Help for Heroes.”

“So I would like to invite golf clubs throughout the UK to make 2015 a memorable year” Lee concluded, “By uniting together in honour of our injured troops and take part in the 2015 National Golf Club Challenge. To compete against each other, have fun and most importantly raise a lot of money for the charity.”

There is no registration fee for golf clubs to take part in the 2015 National Golf Club Challenge; the only requirement is to raise as much money as possible for Help for Heroes while running a qualifier event.

Participating golf clubs can fundraise on the day of their 2015 event, throughout the event week, or even all year long. This makes it easy for every golf club in the UK to take part by simply nominating an existing event in their 2015 calendar as their Challenge qualifier event.

Golfers from each event have the chance to progress to regional Semi Finals and a National Final at the fabulous Turnberry Resort.

Golf Clubs can register to take part in the 2015 National Golf Club Challenge at www.2015ngcc.com.

The NGCC team also run a very popular online auction which also fundraises for Help for Heroes. The auction includes luxurious golfing holidays, highly collectable memorabilia, fourballs from all over the UK, golfing equipment from top golfing brands, enjoyable golf breaks and more. You can bid on the NGCC online auction supporting Help for Heroes at www.ngccauction.com.

Mansfield Sand, a provider of silica sand-based products for the sports turf industry, has donated £1,000 towards a pioneering golf project due to begin in June at Coxmoor Golf Club in England.