Golf’s Glamour Girl to Save Lynx from Extinction 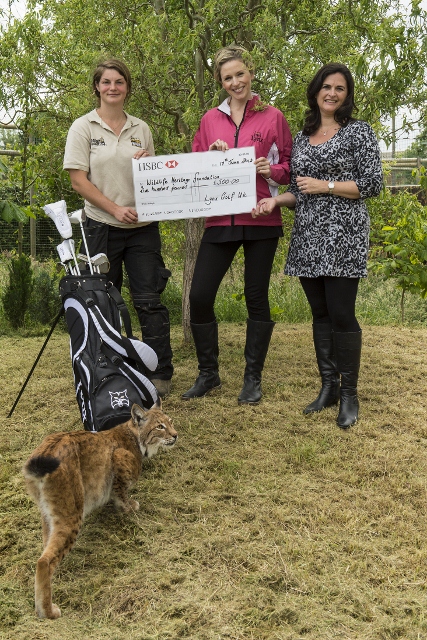 Di Dougherty is the brand ambassador for Lynx- the iconic brand of golf clubs that secured major championships for Fred Couples and Ernie Els in the ’90’s and which subsequently disappeared – like many of the cat species that are cared for at the WHF.

Lynx is now undergoing a UK and European comeback – the brand was once famous for iconic clubs like the “Black Cat” and “Tigress” – and has also decided to help raise awareness of the sanctuary that gives homes and life to a variety of endangered and compromised cat species including tigers, lions, cheetahs and leopards.

Placing importance on the value of corporate social responsibility, Di and Stephanie Zinser – the joint MD of Lynx – elected to sponsor Petra, a 9-year -old European Lynx to underscore the work of the Wildlife Heritage Foundation which has the largest single collection of cat species in the UK and is involved in education and conservation programmes across the world.

Di says: “The European lynx is now extinct in the UK and is virtually extinct in Spain and Portugal. We want to raise awareness of the WHF and the wonderful conservation that they are involved in across the world that helps protect the future of such beautiful cats.”

The association with the Wildlife Heritage Foundation and sponsorship of Petra was a natural move for Lynx Golf. Stephanie Zinser explains, “When I heard about the work of the WHF and in particular about Petra I felt that we had to support their efforts. I am passionate about cats and because we have been relaunching our own Lynx golf brand which was almost ‘extinct’ for quite some years, it was an obvious and inspiring association.”

Peter Sampson – the founder of the WHF said, “We rely on the support of companies like Lynx to fund the care of the cats as well as the vital breeding and re-introduction programmes that we run in association with the European Endangered Species Programme. The centre is not open to the public but is available to companies for corporate events, big cat encounters and photographic days.”

Di Dougherty has recently completing filming a series of DVDs for Lynx which you can see on the Lynx Golf Channel on You Tube (http:http://www.youtube.com/watch?v=GSa0XsI4h8g&feature=plcp)

Lynx is licensed by Charles Claire LLP and based in Cobham, Surrey. The company has also acquired licences for Hippo and Meridian golf clubs. Visit www.lynxgolf.co.uk