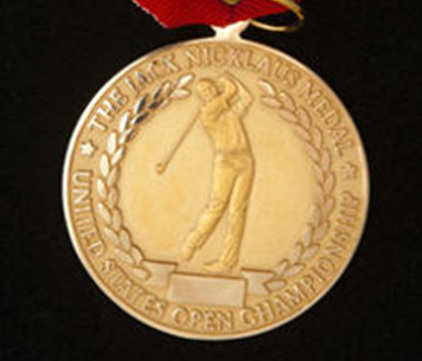 The USGA has announced that the medal presented each year to the winner of the U.S. Open has been renamed in Nicklaus’ honor and redesigned with his iconic image. The gold medal, which has not had a formal name and whose design has evolved over time, dates to the first U.S. Open in 1895, when Horace Rawlins received the coveted prize, and has been given to every U.S. Open champion since.

Beginning with the 2012 U.S. Open, each champion will receive the newly named Jack Nicklaus Medal, which incorporates a silhouette of the four-time U.S. Open champion in its design.

“As we continue to crown future great U.S. Open champions, they will be forever linked to Jack Nicklaus and his remarkable U.S. Open record,” said USGA President Glen D. Nager

Jack Nicklaus is among the greatest U.S. Open champions in history, with a record-tying four victories, and has been inextricably linked with the USGA. In addition to his four U.S. Open wins, he has four runner-up finishes, a record-tying 11 top-five finishes and a record 18 top-10 finishes. Nicklaus was 17 years old when he played in his first U.S. Open, in 1957, and age 60 when he played in his last, in 2000. His 44 U.S. Open starts, made consecutively, remains a record.

Jack Nicklaus’ relationship with the USGA began at the age of 13, when he played in his first USGA championship, the 1953 U.S. Junior Amateur. Nicklaus went on to win eight USGA championships, victories that spanned five decades, from the 1959 U.S. Amateur to the 1993 U.S. Senior Open. Nicklaus also played on two winning USA Walker Cup Teams in 1959 and 1961, and led theUSAto a World Amateur Team Championship win in 1960.

In addition to four U.S. Open titles, Nicklaus captured six Masters, five PGA Championships and three Open Championship victories for a total of 18 professional major championships, the most of any player in the game’s history. He has 73 PGA Tour victories and 120 professional wins around the world.