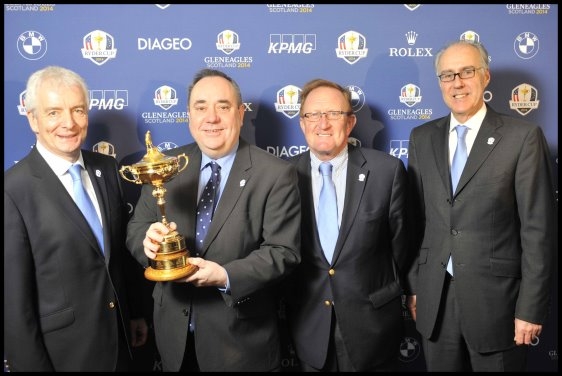 The Ryder Cup at The Gleneagles Hotel, Perthshire, Scotland, will take place from Friday September 26 to Sunday September 28, 2014.

The date for the 40th staging of the biennial contest between Europe and theUnited Stateswas announced at The Gleneagles Hotel in the presence of Scotland’s First Minister, The Rt Hon Alex Salmond MSP,EuropeanRyderCup DirectorRichardHills, Peter Lederer, Chairman of Gleneagles Hotel, and Patrick Elsmie, Managing Director of The Gleneagles Hotel.

Europe are the current holders of The Ryder Cup, having triumphed by 14 ½ – 13 ½ at The Celtic Manor Resort, Newport, Wales last October, but the United States will be keen to reclaim Samuel Ryder’s fabled trophy and hence travel to Scotland in 2014 as holders themselves, after The 39th Ryder Cup which will be held from September 28-30, 2012, at the Medinah Country Club on the outskirts of Chicago.

Alex Salmond MSP, said: “As the home of golf,Scotlandis well placed to host the best Ryder Cup in the competition’s history when it arrives at Gleneagles in 2014.

“The arrangements for this spectacular event are well underway, and I am delighted to announce today that the 2014 event will be held over the weekend of September 26-28, allowing the tens of thousands of spectators expected to attend to begin making their travel plans in earnest.

“I am also delighted to have seen for myself today the many exciting changes that are being made to improve this already outstanding golf course. As well as the hi-tech efforts to reduce water on the greens, the Ryder Cup Teams can expect many of the changes – proposed by Jack Nicklaus – to provide a sterner test as they seek glory during the competition.

“During the week of The Ryder Cup itself, the Scottish economy is expected to benefit by up to £100m, as visitors flock from across the globe to experience superb golf on one of the best courses in the world.

“But the benefits of the tournament will long outlive that special week and be felt for many years to come. As well as the lasting economic benefit, having the world’s premier golf team event on our doorstep will allow thousands of young Scottish golfers chance to see the very best the sport has to offer up close, giving them an experience they will never forget and inspiring them to achieve great things in the future.”

Richard Hills said: “Since Scotland was awarded the staging of The Ryder Cup ten years ago, we have all been looking forward to visiting Gleneagles in 2014 and we are pleased to announce the dates for the 40th biennial contest today here at Gleneagles itself.“Gleneagles have worked closely with Jack Nicklaus Golf Design to deliver a great course and I am certain the Gleneagles team, andScotland, will deliver an outstanding Ryder Cup in three years’ time.”

Patrick Elsmie said: “We are excited that the dates have now been confirmed for The Ryder Cup and are looking forward to the prospect of welcoming the world’s greatest golfers to Gleneagles in 2014.

“We were delighted to re-open the Dormy Clubhouse this spring, following a £3 million refurbishment, and to announce the new appointment of Stuart McEwen, as Director of Golf. This winter we are continuing work on The PGA Centenary Course in conjunction with Jack Nicklaus, with the intention of having the course alterations completed by May 2012.”

The 2014 Ryder Cup will represent only the second time in history that golf’s greatest team event has been staged in Scotland, the previous occasion, in 1973, taking place at almost exactly the same time of year, September 20-22, at Muirfield on the outskirts of Edinburgh.

That match was played a mere six years before players from Continental Europe were welcomed into the fold. Since that landmark Ryder Cup in 1979, the contest has enthralled golf fans the world over with the close nature of affairs summed up by the statistics which have seen Europe win eight times, the United States seven, with one match halved.

Although The 39th Ryder Cup at Medinah Country Club is still ten months away, interest is growing in being part of the crowd at The Gleneagles Hotel in three years’ time.