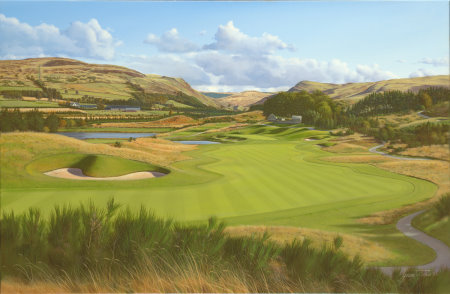 The official painting for The 2014 Ryder Cup was unveiled by First Minister, the Rt. Hon Alex Salmond at The 2012 Ryder Cup in Chicago. Created by world-renowned Scottish golf artist Graeme Baxter, the painting depicts the stunning 2nd hole on the PGA Centenary Course at Gleneagles.

The First Minster was joined by Graeme, Ryder Cup Director Richard Hills and Managing Director of The Gleneagles Hotel Patrick Elsmie for the unveiling at an event at The Medinah Country Club. The painting wasn’t the only celebration of Scotland during the evening with the menu designed by Gleneagles executive chef Alan Gibb, Scottish produce sourced by Scottish Development International and music performed by Julie Fowlis.

Graeme said: “I am thrilled to have my Official Ryder Cup painting of Gleneagles 2014 unveiled at Medinah by both The First Minister of Scotland Alex Salmond, and Richard Hills, Director of Ryder Cup.

“It is also a thrill as Gleneagles is not only one of the most beautiful courses in the world, but that is where I played my golf for more than 20 years.  I have been fortunate over the years to get the chance to paint and visit most of the greatest golf courses and clubs in the world, and I always get asked ‘if you could only play golf on one of the great courses in the world for the rest of your life, which one would it be?’  That is easy I respond. It would be Gleneagles.”

First Minister Alex Salmond said: “Graeme Baxter has created a beautiful image of Scotland that will become familiar to millions around the world as they watch the Ryder Cup action unfold at Gleneagles in just two years’ time.

“Graeme is known internationally for capturing on canvas some of the most famous golf courses in the world and there could be no better artist chosen to depict the Gleneagles course in all its glory ahead of the 2014 event.”

Ryder Cup Director Richard Hills said: “The unveiling of Graeme’s wonderful painting marks another important milestone in our preparations for The 2014 Ryder Cup at Gleneagles.  Graeme has long been recognised as one of the world’s leading golf artists and it is fitting to have him capture the majesty of The PGA Centenary Course in such a way.”

Patrick Elsmie said: “A feature of The PGA Centenary Course at Gleneagles is the feast of spectacular views you get of the countryside in which it is set.  Graeme has captured this brilliantly on the second hole with Glendevon and the Ochil Hills as the backdrop to this great par five.”

The original is owned by Ryder Cup Europe, but prints will soon be available for collectors and fans to purchase from www.cachetuk.com (UK & Europe) and www.graemebaxter.com  (USA).