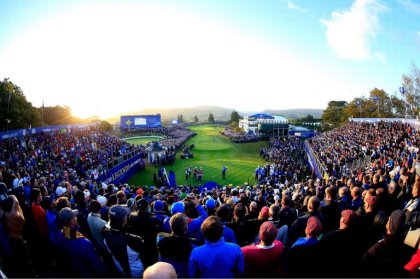 Association Volontaires Ryder Cup 2018 says it received 4,500 applicants to the Volunteer Programme from over 80 countries, writes Ross Biddiscombe. This over-subscription for this year’s match at Le Golf National has been the norm in recent years, while magazine articles and even whole books have been written on the subject.

Actually, at Hazeltine in Minnesota two years ago a much larger group of 4,000 volunteers gathered at the 41st match including 500 members of the host club, while Gleneagles in 2014 recorded 17,500 applicants for 1,800 volunteer jobs.

However, from the original total of applicants this year, 1,300 applicants have been selected for the various volunteer roles and a total of 28 different countries will be represented for what have become some of the most sought-after jobs in the golf industry.

Just under half of the volunteers are coming from France and many volunteers are returnees, having enjoyed the job so much on previous occasions that they have come back for more. Also, a number of volunteers have been working for many years at the Open de France at the same course.

There is a very strict series of rules that volunteers need to abide by – including being punctual and not allowing another person to use their credential – but once their jobs are over each day, then they are free to enjoy the golf. Volunteer shifts do not usually last all day, hence the large number of people who apply every two years even though each volunteer makes his or her own way to Le Golf National each day and also provides their own accommodation. One other benefit, though, is that volunteers are among the first in line to buy a season ticket or a volunteer ticket as well.

The volunteers – who must be over 18 at the start of Ryder Cup week – are provided with a uniform (consisting of a waterproof jacket/ windcheater, a fleece, 2 polo shirts, one drawstring bag and a baseball cap) as well as food and drink during the week – without charge, which is a first.

The value of volunteering is clear given the current message on the European Tour’s website: if you are interested in volunteering at one of our European Tour events please visit //www.europeantour.com/ for further details.

The PGA of America is already asking volunteers to come forward for the 43rd match at Whistling Straits in Wisconsin in 2020.

HONMA has taken super premium equipment to the next level with the introduction of two new handcrafted BERES ranges - the striking BERES BLACK and uniquely decorative BERES AIZU.

Louis Booth, General Manager at Lincoln Golf Club, who won the ‘Young Manager of the Year’ award at the recent Golf Club Managers’ Association conference is a graduate from Cornwall College