With the French golf tourism industry gearing up for a spectacular autumn on the back of the 42nd Ryder Cup at Le Golf National, a new website has been launched to help visitors find the best courses in France, writes Ross Biddiscombe.

With around half the 300,000 tickets for the six-day-long Ryder Cup event being snapped up by visitors from outside France – mostly from the UK and Ireland – it is forecast that bookings on courses in the north of the country and around Paris could hit record levels. 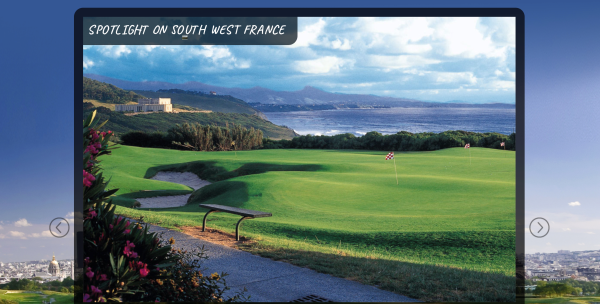 And the new website launched this month by IAGTO, the International Association Of Golf Tour Operators, aims to assist both Ryder Cup fans and any other golfer (who may visit France before the match or after the match) with details about French courses and culture.

Based in Britain, IAGTO unveiled its new site – www.playgolfinfrance.com – as a creation on behalf of the French golf tourism industry to showcase the best destinations particularly for fans who want to combine watching the match with a round or two of their own this September.

IAGTO wants the website to inspire golfers to consider France for their next golf vacation even after this year’s match and the site includes insights and details about destinations throughout the country that best combine golf with gastronomy, wine, beaches, outdoor sports, spa, culture, nature, family activities, city breaks and shopping.

France’s golf destinations are presented region by region and the site features more than 150 golf courses and golf resorts across the country.

The website was built with the support of regional tourism offices and is endorsed by Atout France (the French Tourism Board) and the FFG (the French Golf Federation) and a search facility enables golfers to find IAGTO member golf tour operators, in their own country, that sell golf vacations to France.

France is mostly battling for golf tourists with other continental European countries such as Spain, Portugal and Turkey. However, golf is usually offered to French tourists as a complement to other elements that they usually enjoy in the country such as wine, food and historical buildings. This IAGTO site starts with golf and then adds in the other options.

There are around 600 French golf courses with the British and Irish easily the most numerous visitors with Americans and Canadians together in ninth place on the list, according to one survey.

However, American visitor numbers are bound to increase in 2018 and Guillaume Post, IAGTO Marketing and Communications Manager is delighted with his new digital offering “showcasing the diverse array of golf experiences in France, a few weeks before the second biggest spectator sports event in the world comes to Paris for the first time”.

All French golf courses, but particularly those around Paris, will benefit from this year’s event, only the second to be staged on continental Europe. Although tens of thousands of British fans will stream across on ferries, by Eurostar trains and in cars via the Eurotunnel, the French golf tourism industry is also interested in German golfers who spend the most of any visitor, according to a recent report by SPORTS MARKETING SURVEYS of 10,000 European players. SMS says German golf tourists each spend an average of just over €2,000 while the survey also states that 41% of travelling golfers are likely to visit a former Ryder Cup venue, so Le Golf National will become a true “bucket list” destination after 28 September.

Alexandra Barton, Director of IAGTO France, added: “France is, of course, synonymous with food and wine, history and heritage, everything that already makes it the world’s top tourist destination. But there is so much to shout about as a golf destination. We hope this platform can assist many avid or casual golfers find exactly what they are looking for with ease so that they can go play golf in France.”