A world-renowned Scottish golfing hotel favoured by legends of sport, screen and politics and thousands of international everyday golfers has gone on the market in St Andrews for just under £3 million. 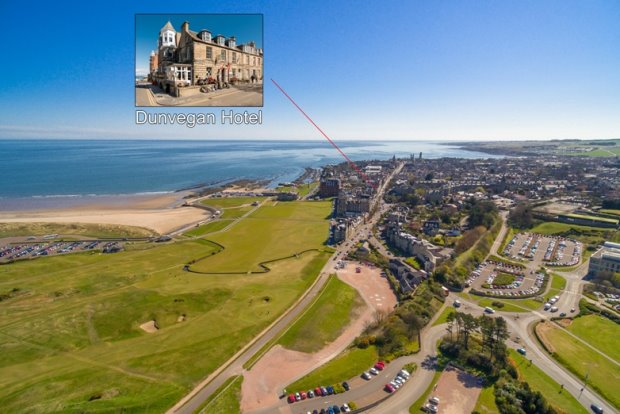 The Dunvegan, whose lounge bar is consistently named as one of, if not the, best 19th holes on the globe, has played host to over 30 major golf champions, including Arnold Palmer, Ernie Els, and Tiger Woods. It has also welcomed everyone from Clint Eastwood and Sean Connery to former President George H W Bush, astronaut Neil Armstrong and sportsmen from both sides of the pond.

Described as the one of the best hangouts in the world of golf, it has been owned and operated for more than 22 years by golf fans Jack Willoughby, a Texan, and his Scottish wife Sheena.

Now the couple, who have put their heart and soul into the venture, have decided, somewhat reluctantly, that it’s time to take a step back from day-to-day running of the hotel. They plan to retire and allow someone else to lavish the same love and unbounded enthusiasm on the unique venue.

Their decision offers an unrivalled opportunity to buy into a piece of Scotland’s golfing heritage  right at the centre of the sport’s iconic home – the hotel is a mere 112 yards, or just a 9-iron, from the Old Course, depending upon the wind.

“We’ve had the time of our lives running the hotel and have loved meeting and hosting so many golfers, golfing celebrities and our true core customers, the not-so-famous golfing visitors, alike,” said Sheena. “You just can’t describe the atmosphere at the height of the season but the place just seems to have a magnetic pull on people from all four corners of the world.

“It’s hectic, of course, but it’s wonderful to see the successes and hear the tales and memories of golfers, their families and the legions of fans that descend on St Andrews every year.

“We see first-hand the passion the sport engenders in people and we’re confident that someone who shares our love for it will be keen to ensure The Dunvegan remains a landmark destination in the global golf network.”

Linda Black, Pagan Osborne’s head of property sales Fife, who is marketing the hotel, says: “This is a once-in-a-generation opportunity to live the golfing dream at the heart of the sport’s birthplace. We believe the hotel, which is so well-loved around the world, will appeal to a whole range of potential buyers from individuals or couples like Sheena and Jack, to groups of friends, syndicates or business investors who appreciate its heritage and superb setting.”

The hotel has been highly rated by media including the Golf Channel, the New York Times, sports channel ESPN and numerous golfing publications and blogs around the world.  And its personality is encapsulated in the Golfers’ Corner Lounge Bar – “the perfect 19th hole”, according to Sam Torrance OBE, former European Ryder Cup team captain.

The lounge pays historical tribute to Open Champions down the years with a gallery of those who have triumphed on the Old Course, dating back to the first winner Tom Kidd in 1873. It also offers today’s guests the chance to eat and drink with the ghosts of former Open Champions.

The bar’s walls and ceiling showcase further photographs of more than 100 world-class golfers, including 27 major champions, who have visited the hotel. Images of other famous guests from the worlds of entertainment, politics, sports etc also feature throughout the hotel alongside hundreds of photos of their favourite, not-so-famous customers.

In addition to the Golfers’ Corner, The Side Room, overlooking Pilmour Place, is the perfect spot to watch the golfing world go by and the outside terrace is ideal for a refreshing drink after a round. The Claret Jug Restaurant, named in celebration of the Open Championship trophy, seats up to 30 and is also golfing themed with pictures of champions lifting aloft the coveted silverware.  Specialising in quality char-grilled steaks, the informal dining area is a great place to relax and enjoy good food, good wine, and a couple of single malt whisky drams after playing the Old Course or other fine courses in the area.

The hotel can accommodate 16 guests in rooms all named after St Andrews Open winners – among them double winner Jack Nicklaus (1970 and 1978) – and the Auchterlonie Suite, across the road. Situated immediately above the famous Auchterlonies golf shop, makers of hand-crafted wooden clubs since 1895, the three-bedroom, two-bathroom suite caters for six guests. Its generous open-plan lounge/living/dining space, plus separate kitchen area, offers a relaxing home-from-home with all the benefits of being a Dunvegan guest.

The Dunvegan is on the market at offers over £2.9million and the current owners may be interested in maintaining a small minority shareholding in the business. See more at: http://www.paganosborne.com/property/the-dunvegan-hotel