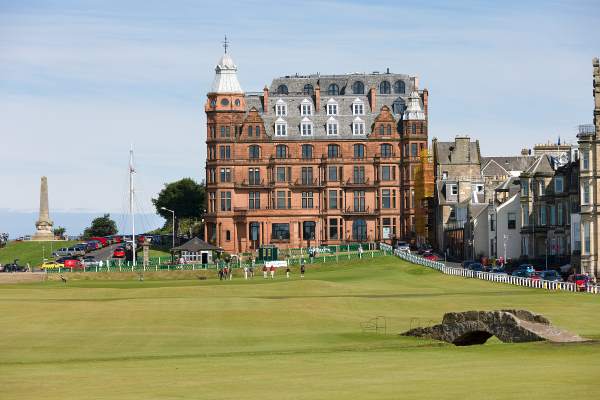 More than a century ago, Thomas Hamilton commissioned a St Andrews masterpiece. In 1895 the world was treated to The Grand Hotel, a living retreat, immediately behind the 18th hole of the Old Course.

It was the first building in Scotland to have a pneumatic elevator and hot and cold water running in every bathroom, setting the benchmark for the ultimate in luxurious hospitality. It played host to royalty – The Prince of Wales (later King Edward VIII) desired exclusive use of the building – and to many famous celebrities such as Mary Astor, Douglas Fairbanks, Rudyard Kipling and Bing Crosby. The Grand also housed the U.S. Walker and Curtis Cup teams as well as every major player competing in the Open Championship.

Built of distinctive red sandstone, The Grand Hotel created something of a sensation, bringing a great splash of colour to “The Auld Grey Toon”. During this time, the Old Course was sorely pressed for available tee times. The size and scale of St. Andrews’ newest building prompted the Royal and Ancient Golf Club to build the New Course, which in turn encouraged the town council to promote the Links Act and gain title to the Links, ensuring unparalleled access to world class golf for those who lived in the town.

The Second World War saw the Air Ministry of the United Kingdom requisition The Grand Hotel, transforming the landmark into training headquarters for the Royal Air Force. The Grand Hotel was never to host high society again.

Shortly after the war, the ever-expanding University of St. Andrews acquired the building and opened it as a Hall of Residence under the name Hamilton Grand Hall, after the Duke of Hamilton, then Chancellor of the University. For 56 years it faithfully served St. Andrews’ student residents. The University sold the building in 2004 and it remained empty for several years thereafter.

Kohler & Co, owners of The Old Course Hotel, Golf Resort and Spa, bought Hamilton Grand in 2010 and carried out a painstaking renovation. The building was stripped back to its outer shell and rebuilt, with an additional floor being added. They have restored this great building to luxurious grandeur, creating 26 unique and desirable private residences. 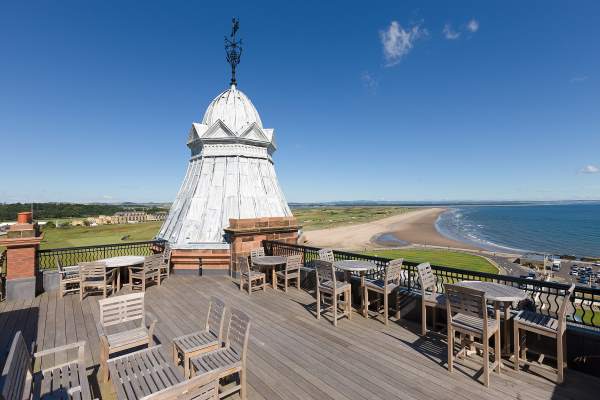 Hamilton Grand comprises 26 homes of distinction – two, three and four bedroom apartments ranging in size from 1,072 ft. 2 to 2,772 ft. 2 with a reception hall and concierge, a private lounge for residents and a sensational roof terrace.

The views (pictured) from this roof terrace, over the Royal and Ancient Golf Club and the Old Course and over the West Sands and out to sea, are beyond comparison. For Further Information and Viewing follow this link or contact Savills on +44 (0)131 247 3700.

Savills Director Jamie Macnab said: “There are many reasons why a particular area becomes a prime property hotspot. In the case of St Andrews is its historic university and proximity to a top golf course. Dating back to 1754, The Old Course in St Andrews, Fife, is Scotland’s oldest and most iconic golf course. It’s also the only top-class course in the country where private homes are situated on the edge of the green. The demand for these properties is high, particularly among high net worth golf-lovers from Europe, North America and Asia and, not surprisingly, they carry a hefty premium. Currently available is a selection of luxurious apartments at Hamilton Grand, overlooking the 18th green. Boasting wonderful architecture and incredible internal craftsmanship, the apartments range in price from £1.3m to over £7m.