World number one Golfer Lee Westwood took time out on Thursday from his preparations for BBC Sports Personality of the Year to meet up with the winning team from the inaugural National Golf Club Challenge in support of Help for Heroes, to make the official presentation of the stunning ‘Lee Westwood Cup’.

In speaking of his support for Help for Heroes and The National Golf Club Challenge, Lee said: “I am honoured to be a patron to the challenge and deeply humbled to be asked by Wedgwood to name the National Golf Club Challenge Trophy ‘The Lee Westwood Cup’ continuing Wedgwood’s long tradition of naming their stunning trophies after some of the most iconic golfers the world has ever seen. It gives me great pleasure to present The Lee Westwood Cup to the 2010 champions, Marriott Meon Valley.” 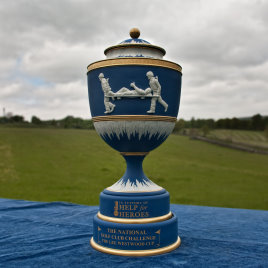 Lee went on to say: “It’s fitting that I have had the chance to present The Lee Westwood Cup in the same week as The Sun’s Military awards, where the nation will once again see first hand how brave our military personnel really are. The inaugural National Golf Club Challenge has been a huge success and I would encourage every golf club in the UK to take up the challenge moving forwards into 2011 so we can again support our brave military whilst enjoying ourselves on the golf course.”

All ten members of the winning Marriott Meon Valley team travelled from Southampton to Cheshire to meet up with the world number one golfer to officially receive the trophy.

The ‘Lee Westwood Cup’ has been made and donated by Wedgwood in honour of injured members of the British Armed Forces in association with Help for Heroes and The National Golf Club Challenge, a nationwide amateur golf competition which raises funds for charity.

The stunning ‘Lee Westwood Cup’ has been hand thrown and turned out of blue Jasper and hand decorated with white bas-relies golfing and military figures forming the main design features. The trophy is mounted on two blue jasper plinths and all edges hand gilded in 22 carat gold.

Eddy Edwards (Team Captain), Meon Valley Golf Club commented “What a wonderful event for such a worthy cause, and what a wonderful result for us! We are thrilled to have won such a prestigious trophy and thoroughly enjoyed an unrivalled experience playing in the National Golf Club Challenge Final at The Belfry, thank you. The Help for Heroes charity is close to all our hearts and we will carry on doing what we can to help improve the care and rehabilitation of our injured troops. This is a very worthy charity event that must grow and I am sure will grow with the support from all golf clubs nationwide”.

Eddy commented further by saying “It is a true honour to be presented with the trophy by the World Number One Golfer especially in such a busy week for Lee with Sports Personality coming up on Sunday, the fact he has taken time out to present the trophy this week speaks volumes about him.”

Stacey Jeffries, Event Director added “To have Lee officially present The Lee Westwood Cup to our 2010 champions is a fitting conclusion to all our efforts over the past 18 months. Lee has been an inspiration to me personally in the way he has supported the event and together we will make 2011 even better than 2010.”

The inaugural National Golf Club Challenge event, which took place in July, was the largest amateur golf charity event the UK has seen. The event brought together hundreds of golf clubs and thousands of golfers over the same weekend to have fun, compete and give generously to the Help for Heroes charity. The money raised to date totals a tremendous £202,273… and counting, with donations still coming in the challenge team hope to raise more than a quarter of a million pounds.