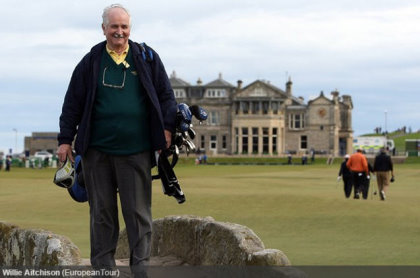 Tributes have been paid to legendary caddie Willie Aitchison, the former European Tour caddie master, following his death at the age of 85.

The Scot, who was inducted into the Caddie Hall of Fame in 2000, ‘won’ The Open Championship on three occasions, first alongside Argentinian Roberto de Vicenzo at Hoylake in 1967, then with Lee Trevino as the American chalked up back-to-back Claret Jug victories at Royal Birkdale in 1971 and Muirfield the following year.

Aitchison started his caddying career in 1951 and worked at every St Andrews Open from the Centenary event in 1960, when he was on the bag for his compatriot Eric Brown, to the Millennium Open, when he caddied for Trevino.

He was the European Tour caddie master for more than two decades, from the early 1980s through to 2002, despite retiring from caddying due to injury in 1995.

Former Open Champion Paul Lawrie, of Scotland, led the tributes, writing on Twitter: “Sad to hear of the passing of caddie Willie Aitchison. Great character who worked for some of the best.”

Scott Drummond, the 2004 PGA champion, added: “Sad to hear that Willie Aitchison has passed away. Great man and top caddie in his time.”

George O’Grady, Chief Executive of The European Tour, said: “Willie was a great character and a renowned caddie who worked with some of the game’s best players.

“He was a familiar face as The European Tour’s long-term caddie master and even in recent years he would still pop in to see everyone at some of our Scottish events. Willie was undoubtedly one of the great caddies and he will be sorely missed.”

Aitchison, who lived in the same street in Glasgow for around 80 years, also caddied for Sam Snead, Gary Player, Tom Watson and, in the early stages of his career, Colin Montgomerie.

His last caddying assignment was for fellow Scot Jamie McLeary, a new recruit to the professional ranks at the time, in the first round of the 2007 Dunhill Links Championship. McLeary took the place of Spaniard Ignacio Garrido after he dropped out injured after 14 holes, with Aitchison picking up the 2001 Scottish Youths’ champion’s bag for the last two holes.

“It was a great feeling for me to get the bag on my shoulder again,” admitted Aithcison. “There was a wee rush of adrenalin. It was great to do it at St Andrews, especially because when I first left home to caddy, back in 1951, St Andrews was the place I had my first job.”

Fittingly, McLeary made birdie at the 18th using his caddie’s advice and Aitchison admitted: “I’m happy to go out on a high.”

In 2010, again back at St Andrews, Aitchison spent some time with Trevino in his hotel suite after the scheduled Champions’ Challenge that year was cancelled due to bad weather. As an added bonus, he also bumped into De Vincenzo the same day. “When Lee and I settled down for a chat in his suite, his first concern was whether I was all right about him having his son, Daniel, caddie for him on this occasion,” said Aitchison at the time. “Of course I didn’t mind. It would have been pure joy for me, simply walking the four holes with them.”

“I feel very privileged that my friendship with Lee has lasted 40 years,” he added in an interview with renowned Irish golf writer Dermot Gilleece. “I told him how my children used to be terrified of stepping out of line, for fear I’d report them to him. They looked on him as a sort of god. I was wondering how I was going to handle it [their get-together after a decade apart] but once we started talking, I was fine. Mind you, I don’t know if I could have contained myself if we had walked up the 18th together.

“That green has wonderful memories for me. Back in 2000, the R&A gave special permission for my wife and family to join me on the 18th with Lee. And the sight of them all prompted him to remark: ‘Willie, I’ve all the money I’ll ever need, but you’re the luckiest man in the world to have your family around you like this. I envy you’.”

On meeting up with De Vincenzo again, Aitchison said: “He seemed as surprised as I was, but we instinctively gave each other a big hug. For years, I had imagined how our reunion might be, if we were to meet again. When it happened, we were so taken aback that we really didn’t know how to react.

“We were together no more than a few minutes. In that time, however, I had a flashback to the scene on the 18th at Hoylake all those years ago. I remembered Roberto hitting a fine three-wood tee shot down the middle of the fairway and then turning to me with his face covered in tears. ‘Willie,’ he said, ‘I can’t see the green. Give me a club that will get me there for two putts’.

“Which I did; an eight-iron. And we walked the rest of the way to the green while everybody in the stands rose to acclaim the new champion. ‘Viva Roberto!’ they cheered. ‘Viva Roberto!’ By that stage there wasn’t a dry eye to be seen. And for Roberto and me, there would never be another moment quite like it.”

* Reproduced with kind permission from The Scotsman