Who’ll be crowned GCMA Manager of the Year?

The GCMA members who made it to the final judging weekend of the association’s Golf Club Management Awards face a nervous wait before they find out if they’ve triumphed at next week’s GCMA 2017 Conference. 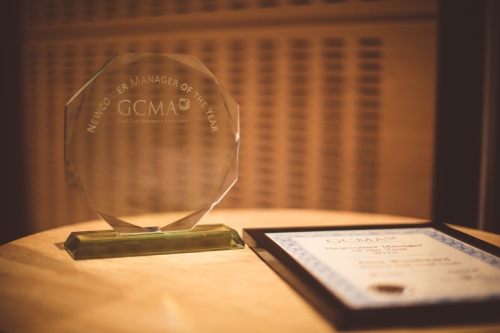 Last weekend finalists across three categories – Manager, Team and Newcomer of the Year – spent two days at The Oxfordshire for the final stage of a rigorous judging process that has seen an extensive list of nominees whittled down to just eight candidates.

From the initial shortlisting, the judging process took around five months as nominees were narrowed down through various personal interviews, secondary discussions and reviews following specific judging guidelines.

The penultimate stage of selection saw industry experts undertake a site visit in October to see first-hand the impact they were having on their clubs.

GCMA CEO Bob Williams was particularly inspired by his visits, commenting: “Sometimes golf needs to shout a bit louder about the success stories that exist throughout our industry. There is some tremendous work going on at a huge range of clubs, and the game of golf is certainly in very safe hands when it comes to our finalists. It was an incredibly difficult decision to split them, and they would all be deserving winners.”

The finals weekend saw nominees face an intense ‘Apprentice’-style interview in front of the judging panel, who then locked themselves away to deliberate. In a sign of how closely matched all the finalists were, discussions went on for several hours.

The winners will be revealed during a glittering ceremony on Monday 13 November at Mercedes-Benz World, with the prizes including a holiday to Thailand, a UK golf break and a trip to the BMW PGA Championship.

Although not involved in the final judging process, representatives of the three category sponsors – intelligentgolf, Golf HR and Colt Mackenzie McNair – joined the social parts of the weekend to congratulate all the finalists on making the shortlist from an extensive list of initial nominees.

Manager of the Year sponsored by intelligentgolf

Team of the Year sponsored by Golf HR

Newcomer of the Year sponsored by Colt Mackenzie McNair

Nominations for each of the award categories could be put forward by anybody who knew of somebody, or a team, that deserved to be recognised for their achievements. The 2015 winners were Andrew Minty (Manager), High Post (Team) and Alex Woodward (Newcomer).

The 2017 awards ceremony will be held at the biennial GCMA Conference, held from 12-14 November 2017 at Mercedes-Benz World.