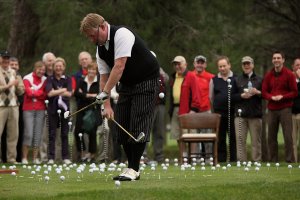 Fireworks are expected at the Ryder Cup at Celtic Manor this weekend but in the build-up to the event some very different golf shots will be on show.

While the likes of Tiger Woods, Phil Mickelson, Padraig Harrington and Rory McIlroy prepare to battle it out in the famous biennial clash between the USA and Europe, world record breaking trick shot maestro and former European Tour player David Edwards will be entertaining the galleries with his extraordinary golfing skills.

The world’s top golfers as well as the crowds will have the chance to admire David’s displays including his trademark “scissor shots” which earned him a world record in March for hitting 312 balls in three minutes. David will be using his special set of PING clubs which include clubs with a shaft made of a hose pipe, a cricket bat, a fishing rod and one where the driver head is fitted at the end of a golf umbrella.

“I am very excited to be here at Celtic Manor and helping to build up the anticipation for the matches with some displays,” said David. “The Ryder Cup is such a fantastic event with such an electric atmosphere that I think people enjoy having a bit of fun as well. It is certainly a highlight of my season to appear here and I am very pleased to see so many spectators enjoying my show.”

David will be staging his last performance at the Ryder Cup on Thursday. From there he will travel to Cardiff Bay where he is scheduled to provide corporate hospitality entertainment for KPMG clients on Thursday, Friday and Saturday night.

In a busy year working closely with the European Tour David’s travels have taken him to major events such as the Volvo China Open and the British Senior Open at Carnoustie. At the end of October David will be travelling to Egypt to perform at the Egyptian Open.

David will finish off the season in style in the United Arab Emirates performing at the climax of the European Tour at the end of November in the Dubai World Championship at Jumeirah Golf Estates. Following the event David will participate in the sponsors´ day and entertain the participants by providing a light-hearted on-course commentary.