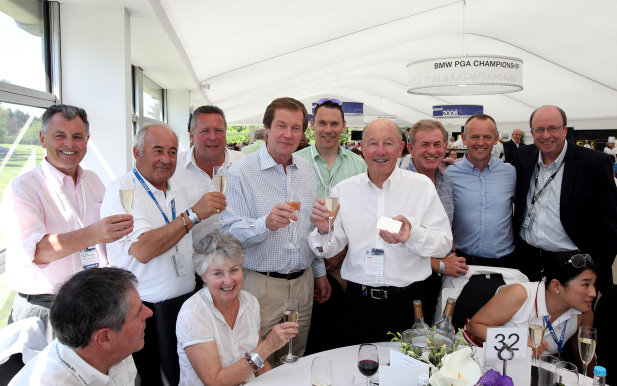 Tommy Horton has been awarded Honorary Life Membership of The European Tour in recognition of his outstanding contribution to the game, as a player, coach and administrator.

The Englishman, who celebrates his 71st birthday on 16 June, turned professional in 1957 and won eight times – including four times after the formation of The European Tour in 1972. He played in The Ryder Cup in 1975 and 1977 and finished in the top ten in The Open Championship four times.

He then became one of the driving forces behind the development of the European Senior Tour, winning 23 titles, which stood as a record until it was overtaken by Carl Mason last year. Remarkably, in 245 Senior Tour appearances he finished in the top ten 107 times and won the Senior Tour Order of Merit a record five times.

In addition to his glittering playing career, Horton is a renowned coach, course designer, broadcaster, author and administrator.

He was instrumental in setting up The European Tour’s Annual Training School– Apollo Week later known as MacGregor Week – which was formerly held at the start of each year in southern Spain to give aspiring Tour players a holistic grounding in life as a professional.

His short game clinics became legendary and alongside John Jacobs, Dennis Pugh and Harold Swash he led a team of coaches who for more than ten years provided inspirational coaching to more than 200 rookies, including graduates such as Thomas Björn, Ignacio Garrido, Vijay Singh and Lee Westwood.

Horton, who was awarded the MBE in the 2000 New Year’s Honours List for services to golf, has also been Honorary Captain at the past two Ryder Cup Junior Matches – a role he will continue in America this  September – helping to nurture a new generation of players.

In recognition of all of his achievements and tireless dedication to the game, Horton was presented with his specially engraved Honorary Life Membership card by European Tour Chief Executive George O’Grady.

Horton said: “This is a huge honour for me and I am very proud. It came as a total surprise. I saw Gary Player and Bob Charles receive it a few years ago and I thought what a wonderful way to recognise all they have done for the game, but they are better known than I am.

“It’s very kind that I have been recognised. Every day I have woken up and looked forward to playing golf. It’s a fantastic challenge to improve and become better and I have also enjoyed trying to help others improve themselves as well. I took a lot of satisfaction from the Training School. We wanted to train these young professionals to be the best they could and guide them on how to take care of themselves.

“Golf has always had a good image and the players who have come through that have carried this on. I have always been very proud of that.”

Another source of immense pride for Horton is the role he played in the growth of the Senior Tour.

“The Senior Tour was a fantastic bonus for us,” he said. “When I was on the European Tour we didn’t make as much money as they do now so the Senior Tour was our pension, a way of making sure players made a provision for themselves. It was the icing on the cake of your career.

“In the early days the players weren’t quite as ready for senior golf as they are now, but I was still fit and enjoyed a lot of success. I thought it would have been fantastic to have reached 25 wins but I didn’t quite make it.

“I thoroughly enjoyed my time though, and I still try to play in one event a year. I wish I was still playing really.

“My wife keeps a scrapbook with photos from my career, which is something I would advise every golfer to do so you can look back on what you have achieved. My grandkids have seen it and they said to me: ‘Granddad, you were a pretty good golfer, weren’t you’.”

Born in St Helens, Merseyside, Horton moved to Jersey in 1945 where he was brought up and educated. He celebrated 25 years as club professional at Royal Jersey before he retired from that position in 1999.

Always conscious of giving back to the game, Horton’s presence at the heart of golf, from grass roots to the very pinnacle of golf, has never diminished. He was first appointed to the Board of Directors of The European Tour on 4th December 1984 and remained there until May 1993. A year prior to stepping down from that role, he was appointed to the Senior Tour Committee and was then appointed as Chairman of the Senior Tour in December 1996, gaining an automatic seat on the Board of Directors of The European Tour. He remained in both roles until his resignation as Senior Tour Chairman in December 2006, as he began reducing his playing schedule.

“I always thought being on committees was a good idea,” he said. “In other sports players don’t have a say like we do in golf. Sir Bobby Charlton and Geoff Boycott have always said to me that golf is so well organised and we look after our youngsters. I’ve always tried to not only make myself better, but others too.”

George O’Grady, Chief Executive of The European Tour, said: “Tommy has been an outstanding ambassador for the game of golf throughout his career and this is a small way of recognising just how much he has contributed. A superb player in his own right, he has helped countless other players by passing on his extensive knowledge and he was instrumental in the Training School and the development of our Senior Tour. His influence has been wide-ranging and has benefitted so many players.”

The DP World Tour has announced a change to its early 2022 schedule due to ongoing restrictions associated with the global Covid-19 pandemic.

Burhill Group Limited, owner and operator of 22 golf courses across 10 UK golf clubs, is celebrating the record-breaking fundraising achievements of one of its employees who has raised an incredible £50,000 for a mental health charity through a gruelling cycle challenge.

PING has signed two promising US collegiate golfers, Rachel Heck of Stanford University and Ollie Osborne from Southern Methodist University, to ‘name, image and likeness agreements’ ahead of the new season.