The renowned Sutherland links has a rich history with Open winners given its connections to James Braid and Peter Thomson. Braid, who redesigned the course at Brora in 1923, won his fifth Open in 1910, while the recently-deceased Thomson claimed his five titles between 1954 and 1965. Now Watson, 69, has joined that illustrious list after the club reached out to the global golfing icon following his visit to Brora last summer. 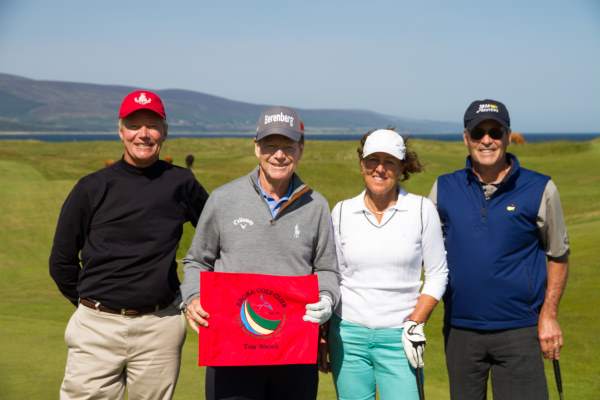 Prior to the Senior Open Championship at Royal Porthcawl in Wales, the American flew into Scotland to tune up his game and enjoy a true links experience at some of the Highlands’ most notable venues, including Royal Dornoch, Nairn, Castle Stuart and Brora. The picture shows Watson after his round at Brora with his brother, Ridge Watson, and friends Tuck and Janine Clagett.

Watson, who won four of his five Open crowns in Scotland, savoured his experience, with then Brora senior champion Ronnie Sim acting as caddy for his round at Brora. Club officials have since made contact with Watson and now added him to their honorary status given his love for the links at Brora.

Watson, the USA Ryder Cup captain at Gleneagles in 2014, said: “I’m delighted to be awarded honorary membership at Brora, joining my fellow five-time Open champions James Braid and Peter Thomson. Last year, we flew to Inverness, went up to the north and just had a marvellous time. Brora was a wonderful links golf course.

He added: “Playing the incoming nine downwind was really tough for me. I couldn’t keep the ball on the greens. I think I hit one green in regulation coming in and shot 76. It was a very good course. I’d like to challenge it again and look forward to coming back one day.”

Brora club president Andy Stewart said: “We’re privileged Tom Watson has accepted honorary membership of the club. Ever since he was here last summer and spoke so highly of Brora, we had this in our plans and are now delighted to make it official. Last July, Mr Watson was greeted by a small band of fans and well-wishers. He graciously signed autographs and posed for photos. After his round, he visited the Peter Thomson room and signed a flag for the club. My only regret was that I wasn’t able to be there to greet him personally. We are fortunate to be associated with such great five-time Open champions at Brora, and look forward to welcoming Mr Watson back to the club one day soon.”

Brora, which was established in 1891 and is home to the James Braid Golfing Society, offers a par 70 course, measuring 6,211 yards off the whites and 5,951 yards off the yellows. The club has bucked national trends this year, with membership up by nine per cent across all categories over the last 12 months, while the club has welcomed a record number of 6,500 visitors.

Pictured: Tom Watson at Brora with his brother Ridge Watson and friends Tuck and Janine Clagett