‘The Search for the Perfect Swing’ – 50 years on

The author of what many have described as the ‘The Bible’ for golf coaches returned to The PGA for a special event to mark the 50 years since the publication of ‘The Search for the Perfect Swing’.

Dr Alastair Cochran’s book remains one of the seminal pieces of work that has applied scientific methods to study the game of golf. It continues to be referenced today by scientists, educators and practitioners across the world of golf.

Cochran was the guest of honour at PGA headquarters inside The Belfry, Sutton Coldfield, on May 21 and his book’s popularity was demonstrated with almost 100 people attending the sold out event inside the PGA National Training Academy. 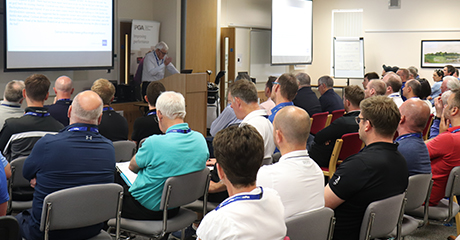 “It’s been a life-changing thing for me,” said Cochran. I’ve always been an academic and a research physicist, but this book as got me all round the world.

“I personally didn’t anticipate the sort of impact the book would have on golf. There’s a great cult following who think it’s the best thing since sliced bread. It was fun to do and it got a few other people starting to think about things like that.

“When I finished doing some work for The PGA on their manuals three to four years ago, I thought that was it. But meeting these guys got me excited about golf again and what they’re doing.”

A select group of world-leading experts who are involved in researching various elements of the game were also in attendance.

David Colclough, Head of Coaching & Sports Science at The PGA, added: “It was a great honour to recognise the considerable contribution that Alastair has made to the development of the game of golf through his original work with ‘The Search for the Perfect Swing.

“We were also delighted to get such a wonderful line-up of speakers, who so neatly related the most current research findings to Alistair’s work from 1968.

“I think it showed what an essential read the book still is for anyone serious about understanding the science behind the game.”