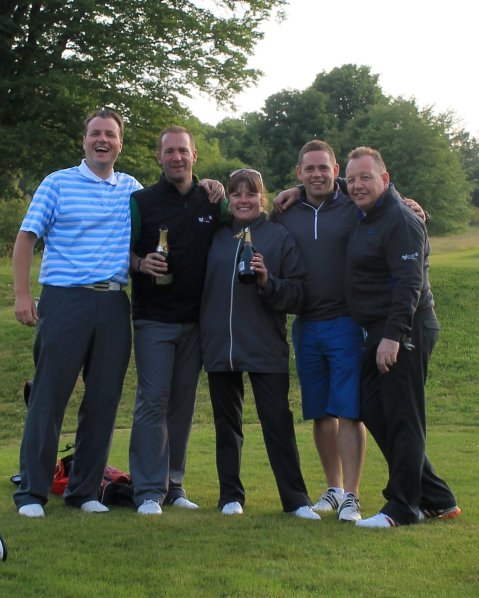 The TGI Golf Partnership’s Retail Consultant team of Ian Martin, Chris Taylor and Fraser Carr joined Reid in the challenge, which started at 4am on Thursday, June 20 at Paisley Golf Club and concluded a full 16-and-a-half hours later at Ranfurly Castle.

In between the foursome played 18 holes at both Ralston Golf Club and Elderslie to complete a marathon 72 holes and raise thousands of pounds for the group’s chosen charity for 2012, the Make-a-Wish Foundation, which aims to grant magical wishes to children and young people fighting life-threatening conditions.

To keep their minds sharp and maintain a competitive edge there was a little side competition withScotland(Eddie and Fraser) taking onEngland(Ian and Chris). The competition remained tight the entire way around the four courses, but it was the English duo that finally triumphed late in the day on the 69th hole, to win 3&2.

Eddie Reid said: “We were extremely lucky with the weather as the sun, once it had risen, shined on us all day. It was a tough day, but well worth it and we are delighted to have raised so much money for Make-a-Wish.

“A big thank you must go to all the TGI Golf Partners and Partner Suppliers who have supported us, and to the four golf clubs for allowing us to play their courses.

“There were some aches and pains once the golf was completed and the four of us all had a very early night as by the end we were shattered.”

While the boys slugged it out over the four courses, their colleague, Adele McLean, TGI Golf’s Product and Event Manager, had arguably the toughest job of the day as she accompanied the fourball with supplies of food and drink!

Donations are still very welcome to this magnificent cause via the dedicated Just Giving page where you can make a donation.