T-Rex is a smash hit with junior golfers

PGA professionals Jon Woodroffe and Richard Morris have used giant dinosaurs in an adventure putting course to help inspire thousands of youngsters to try the game. And in doing so, the initiative has not only proved a smash hit with the kids but also the Golf Foundation.

The pair, under the guise of The World of Golf (New Malden) have won the 2010 Laddie Lucas Award, which is presented to the local development project that has created access opportunities within a particular facility or locality.

For Woodroffe, World of Golf’s golf development manager and a PGA Fellow Professional, it was the second time he had won a Golf Foundation award in three years, following him picking up the Sinclair Award in 2009.

That was for a PGA professional who had a made a significant impact in the development of grass roots junior golf and Woodroffe said: “The great thing about awards like these is the recognition that guys like Richard and myself get. They’re not spectacular or for the higher echelons – they’re for people developing the game. It’s also great for the Golf Foundation and all it does for the game.

“I also feel that, because of the financial problems in the golf industry over the last couple of years, what Richard and I have been doing for many years is becoming a bit more fashionable. For many years we were made to feel we did a job nobody was really bothered about and were viewed as ‘lowly driving range pros’ teaching beginners.

“It makes you feel you’re not really capable. Now we feel a much more important part of the industry and people are starting to look at our end of the market.” 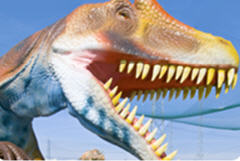 The initiative at New Malden includes a Schools Go Free Campaign and Woodroffe added: “The scheme’s going from strength to strength. We get a new batch of kids every year and they pass on the word so more and more get to know about it.

“We had a thousand in the first year, two thousand in the second year and three thousand this year. We’re also rolling the programme out at our Sidcup branch and we’re building adventure courses at Croydon and Glasgow.

“The animatronic – roaring dinosaurs coupled with golf – is a totally different experience for the children. So they go away, having held a putter and had a go at golf and associating the sport with fun.”

Morris, meanwhile, has come full circle after giving lessons to youngsters in north Wales for the Golf Foundation many years ago.

“Being able to deliver this is brilliant,” he said. “We get lots of mixed ethnic groups and girls. We’ve also started groups for teenagers, particularly girls who traditionally don’t play much sport at all. It’s great getting them involved.”

Woodroffe, however, stressed that the award was for a team effort that involved his staff and New Malden and Richard Shaw of the Surrey Golf Partnership.

He added: “We work quite hard doing what we do but I’ve never met anyone who works quite as hard as getting this golf development off the ground. The help he gives us is immense. There are also a lot of people in the background whose help is invaluable.”

Commenting on the pair’s success, Mike Round, the Golf Foundation chief executive, said: “Through this project, more than 3,000 children aged from seven to 11 have been given a fun introduction to golf. Many have then gone on to join the golf coaching programme at the facility.

“Furthermore, there is an educational element to this project.  While playing around the putting course the children see the dinosaurs move and roar and can read information boards that teach them about these incredible creatures.

“We all know that there are dinosaurs in golf clubs up and down the land but the ones in Kingston are being used to inspire youngsters to take up the sport.”