Stars out in force at Berenberg Gary Player Invitational 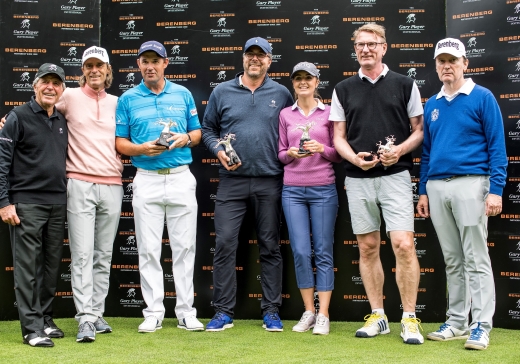 Berenberg, the private and investment bank and Black Knight International, united some of the biggest names in golf, business and entertainment under the banner of ‘Golf & Giving’ to raise more than £126,000 for various children’s charities including youth homelessness, Depaul.

However, it was the team led by three-time Major Champion Padraig Harrington, who retained his title from last year, and Ladies European Tour star Alex Peters that claimed overall victory on the day, with a combined team score of 86 points.

Tournament host Gary Player, said: “I continue to be blown away by the generosity and support of the players and the sponsors and am thrilled by the funds we have been able to raise this year.

“I visited Depaul recently and can testify to the significant difference the money raised during this event makes and the positive impact it continues to have on so many young lives.”

The day culminated in a black-tie dinner and auction, where guests were given the opportunity to bid on a selection of once-in-a-lifetime experiences, including The Masters, Wimbledon, Manchester City experience, The Porsche European Open and an entertaining speed painting done by Dave Sharp before being treated to a performance by Abba.

Following the successful event, Dr. Hans-Walter Peters, Managing Partner at Berenberg, commented: “We are proud to be associated with some of golf’s most iconic individuals. It’s an honour for us to support Gary’s charitable activities, which continue to make a tangible difference to the lives of underprivileged children, not only in the UK, but across the world.”

Marc Player, CEO of Black Knight International and founder of The Player Foundation, added: “I would like to personally thank all of our sponsors, especially Berenberg as well as the players who attended today. Without their ongoing support of the Gary Player Invitational series, we would simply not be able to achieve our goal of raising $100 million for charities around the world by 2025.”

The event at Wentworth Club is part of the world leading Gary Player Invitational series, which has helped The Player Foundation raise more than $63million for charitable causes.

In addition to the United Kingdom, annual events are staged by Black Knight International in Abu Dhabi, Japan, USA, China and South Africa.