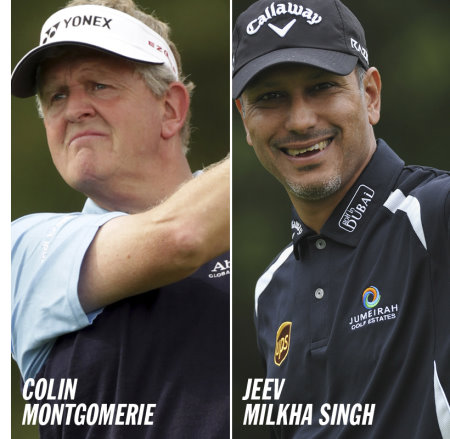 The 2012 Asia Pacific Life-Time Achievement In Golf Award will be presented to Colin Montgomerie and Jeev Milkha Singh.

The award which is in its sixth year is presented to recipients in recognition of their playing achievements in golf.

The awards will be presented to Montgomerie and Singh at the Gala Awards Banquet of the 2012 Asia Pacific Golf Summit in Brunei Darussalam on 12 December.

“We have selected Colin and Jeev as we see them as two individuals who have attained great success in their professional careers and they have also been very inspirational and influential in growing the game of golf in their respective countries,” said Mike Sebastian, chief executive officer of the Asia Pacific Golf Group, the organization behind the award.

Montgomerie who turned professional in 1988, was named the Rookie of the Year on the European Tour that season. He quickly developed into one of Europe’s top pros and went on to finish first on the European Tour Order of Merit for a record stint between 1993-1999. Montgomerie was considered one of the best drivers of the golf ball in the world and became a very precise iron player, often able to judge the distance he hit the ball exactly from long range.

Jeev Milkha Singh turned professional in 1993 and his first professional win came in the same year at the 1993 Southern Oklahoma State Open. He is also the first Indian player to join the European Tour.

Singh has won five events on the European Tour, making him the most successful Indian on tour. The son of Indian Olympic athlete Milkha Singh, he has also won the coveted Asian Tour Order of Merit.

In 2007 he became the first Indian golfer to participate in the Masters Tournament and in August 2008, Singh achieved the highest ranking for an Indian in any major event at the PGA Championship in Oakland Hills, finishing at T9, making him arguably India’s best golfer ever.