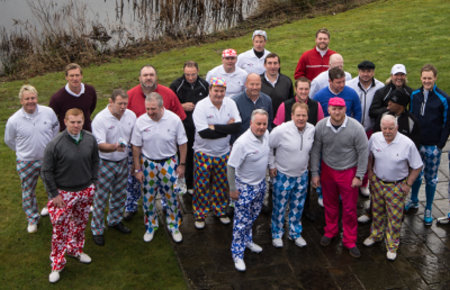 A host of football personalities, from north and south of the border teed off with Celtic legend John Hartson in a charity golf challenge to aid the fight against testicular cancer – and created quite a stir with their awesome outfits.

Ex-Westlife star Brian McFadden also joined the line-up and said: “This has been a fantastic day and while it has been a lot of fun, there’s a serious message at its heart. Checking yourself for lumps and bumps should be a regular part of the routine for guys – or even get your partner to do it. The earlier any worrying symptoms are checked out, the better.”

Savage, who has been friends with international team-mate Hartson for years, was one of the first to pledge support for the day.

He said: “John and I go way back and, like many others in the world of sport and beyond, I was devastated when I found out about his illness. It’s fantastic to see all the work he does raising money to help others and spreading the word about testicular cancer. I’m ‘grabbing life by the balls’ and I would urge everyone else to do the same.”

Stubbs, who beat testicular cancer in 1999 only to battle a spinal tumour just 18 months later, has given his backing to Hartson’s mission to raise awareness. He said: “I had no hesitation in supporting such a wonderful cause. From my own experience, I know how important it is to get the word out about looking after your health.”

Kevin MacDonald and Douglas McCance of Scots rock ‘n’ roll bagpipers the Red Hot Chilli Pipers piped Hartson and guests out to start the day, which was followed by a gala dinner in Cameron House.

Hartson, sporting sponsor Royal and Awesome’s distinctive ‘pink ticket’ apparel, said: “I’m delighted by the support we’ve had for the first John Hartson Foundation Golf Day we’ve held in Scotland and hope this will be the first of many.

“We’re not only raising funds, but spreading the word about testicular cancer and the importance of checking yourself by getting our ‘Grab Life by the Balls’ message out there.”

Hartson set up the foundation following his 2009 battle with testicular cancer which spread to his lungs and brain and left him fighting for life.

The charity raises awareness of testicular cancer and supports people with cancer and their families. Last November, the former Wales international presented a cheque for £50,000 to Yorkhill Children’s Foundation, to help provide facilities for families whose children are being treated for cancer at Glasgow’s Royal Hospital For Sick Children.