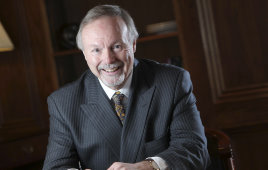 Sir Terry Matthews has launched a brand new business opportunity at The Celtic Manor Resort as he seeks to build on the legacy of last year’s successful Ryder Cup.

Companies of all sizes will get the chance to tap into the entrepreneurial expertise of Sir Terry by becoming members of his Chairman’s Club. The Chairman of Mitel and March Networks as well as Celtic Manor, Sir Terry will host an annual business networking event as one of the benefits of membership which also include recognition and hospitality at The Celtic Manor Wales Open, one of the leading events on golf’s European Tour.

Those joining the new club will become part of Celtic Manor’s future, using its five-star facilities to entertain clients, reward or incentivise staff, and to network with like-minded businesses.

Sir Terry said: “The year 2010 was a milestone in the history of Celtic Manor. The Ryder Cup, which we hosted on the purpose-built Twenty Ten Course, was hailed as the ‘greatest ever’.

“The event transformed Celtic Manor from a leading UK destination to a globally recognised brand, which will continue to attract visitors to Wales for many years to come. The Ryder Cup is only a starting point, however, for a new chapter in Celtic Manor’s development and I am excited about what lies ahead. We aim to crank up the profile of The Celtic Manor Wales Open and the event will be a focal point for my new Chairman’s Club.

“I think businesses throughout the UK will benefit immensely from a close association with Celtic Manor and the Wales Open, and I am personally looking forward to hosting our business networking event during the tournament week.”

Chairman’s Club members will enjoy year-round benefits at The Celtic Manor Resort which has been voted the UK’s Top Conference Hotel for the last four years and is Europe’s Golf Resort of the Year for 2011, chosen by the International Association of Golf Tour Operators.

These include overnight stays in the five-star Resort Hotel, golf on the championship courses, a Chairman’s Club Golf Day hosted by Resort Ambassador Gareth Edwards and preferential rates on dining, conferences, meetings and events.

With three different levels of membership – Prestige, Premier and Elite – every member of the Chairman’s Club will enjoy benefits at this year’s Celtic Manor Wales Open which runs from June 2-5.

Last year’s tournament was won by Graeme Mc Dowell who went on to become the first European in 40 years to win the US Open and then returned to Celtic Manor’s Twenty Ten Course to secure the winning point in a dramatic finish to October’s Ryder Cup, the first ever held in Wales.

It is anticipated that many of the heroes of Europe’s triumphant Ryder Cup team will return to contest The Celtic Manor Wales Open and many spectators are sure to revisit the scene of so much drama.

Chairman’s Club members will enjoy hospitality at the pre-tournament Gala Dinner as well as during the event itself and will have their company logo displayed at the tournament entrance, on the official website and in the souvenir programme.

Those committing to a four-year membership will also receive tickets or hospitality, depending on their membership category, to the 2014 Ryder Cup at Gleneagles.