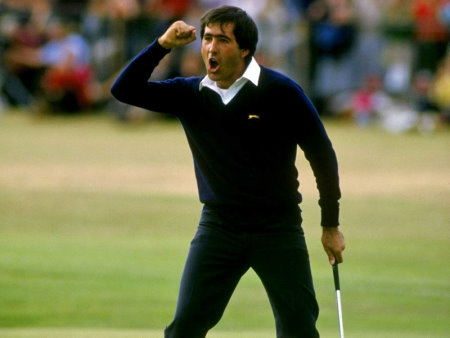 Seve Ballesteros’ dramatic final putt to win the 1984 Open has been voted the most memorable moment in Open Championship history, according to a poll conducted by retailer american golf.

Almost a quarter of golf fans (23 per cent) highlighted Seve’s triumph on the 18th hole at St Andrews as the most memorable British Open moment. The mercurial Spaniard held off the challenge of Tom Watson to capture the Championship with a 15 foot Birdie putt. His fist pumping celebrations following the putt have become one of the game’s most iconic images.

Tom Watson’s performance at Turnberry in 2009 was the next most popular choice capturing 13 per cent of votes. The veteran American defied age and a hip replacement operation to come within a whisker of securing his sixth Open title.

The poll, which ran across american golf’s social media channels, gave golf fans the opportunity to select a ‘most memorable’ British Open moment from a shortlist of five or alternatively nominate their own choice.

The shortlist included Tom Watson versus Jack Nicklaus in the ‘duel in the sun’ (gaining 10 per cent of votes), Jean Van de Velde’s infamous collapse in 1999 (nine per cent) and Ben Hogan’s triumph in 1953 (three per cent).

Seve also proved to be the most popular choice for those golf fans that nominated a moment that was not on the shortlist, with the Spaniard’s performances at the 1976, 1979 and 1988 Championships all receiving nominations. Other notable choices included Nick Faldo’s three Open triumphs, Tiger’s flawless performance in 2000 and Darren Clarke’s emotional victory in 2011.

Dan Gathercole, Head of marketing at american golf, said: “The Open is one of the showpiece events of the British sporting calendar and with so many iconic moments, such as Seve’s putt in 1984, it is arguably the greatest major in golf.  These moments create indelible memories and are one of the main reasons why golfers were attracted to the game. Hopefully a new generation of golfers will be inspired by the events at this year’s championship.”