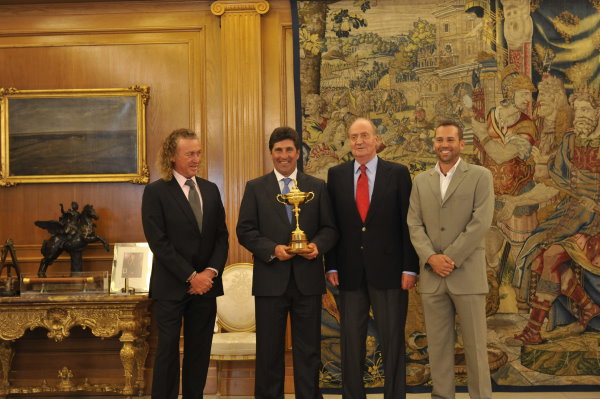 Captain Olazábal, who led Europe to glory just over a fortnight ago, was accompanied by Garcia, one of the heroic 12 players, and Vice-Captain Jiménez as they presented the Ryder Cup trophy and a signed shirt worn on that historic Sunday at Medinah Country Club, Chicago, to His Majesty The King during a special audience at the Palace.

After greeting the three golfers, His Majesty took them aside for a private meeting, after which they shared their experience with the assembled media gathered at neighbouring Somontes Golf facility.

Olazábal said: “This was my second visit to the Palace to see His Majesty and it was a great honour. I came here in 1994 when I won my first US Masters but I came with my family that time. It was a very different experience then as I came as an individual. Now we have come here representing another 11 players, another three vice-captains and the whole of the European Ryder Cup team.

“The fact that His Majesty has invited us to his Palace makes the whole thing very special. There are iconic places and this is one of them but the beauty of this is that he has received us because of what we as a team have all achieved not just the three of us here today.”

Europe equalled the greatest comeback in the history of The Ryder Cup when they came from four points behind on the final day to win The Ryder Cup by 14 ½ – 13 ½ , and keep Samuel Ryder’s golden chalice in European hands.

“He made us feel very comfortable and at ease and it’s been a very nice conversation,” added Olazábal. “He said he was very pleased with the polo shirt from that famous Sunday which is history now and said he wanted it in his trophy cabinet! He said he watched a lot on TV but could not watch it entirely but he has asked us to send him the DVD, which we will do.”

King Juan Carlos also spared a thought for the late Severiano Ballesteros, who died last May.  “He touched my heart when he mentioned Severiano and he said how sad it was to lose him so early,” said Olazábal. “He also talked about the performance of the Spanish players in The Ryder Cup, especially the passion we have put into the event. He was very knowledgeable.”

Olazábal admitted he still wakes up in the middle of the night thinking he is playing one of the matches and highlighted some of the key moments which turned the match in Europe’s favour.

“What Poulter did, especially on the Saturday, changed the heart of the rest of team,” he explained. “When we got together on Saturday evening I could see on their faces there was a different look. There was a totally different atmosphere which was the key to the victory the following day.

“Then on Sunday there were so many emotions. Sergio recovering his match and winning that point was essential and then when Martin Kaymer holed that putt he closed the door to the American team.

“Thanks to the 12 fantastic guys The Ryder Cup trophy will stay in Europe for another two years.”

Jiménez was impressed with how well informed His Majesty the King was.

“He knew how important those two points on Saturday afternoon were,” he recounted. “We had never suffered so much as we did those first two days. The Americans were holing everything and our putts did not go in but in the end justice was done.

“One of the most impressive things since we have been back is the number of people who do not play golf and they keep telling us they did not move from their sofa on Sunday. They were stuck there with glue. Hopefully this will create more golfing fans and people will talk more about this wonderful sport. This Ryder Cup has been like no other.”

And Garcia was likewise honoured by the experience.

“It was my second visit to His Majesty the King and it is always a very special experience,” said Garcia. “This does not happen many times in your sporting career.

“His Majesty mentioned the putt I holed to win my match and he was very well informed how it all happened. He said if it had been the other way round and we were 10-6 up, maybe the whole world would not have paid so much attention.”

Looking back at his own highlights from Medinah, Garcia focused on the performances of Poulter and Kaymer in particular.

“Ian Poulter was amazing,” he said. “He knows the meaning of The Ryder Cup and he lives for the Ryder Cup. It’s fantastic to have someone like him in the team, someone who can make the spirit turn at the right moment. If I had to choose one moment of the Ryder Cup it is quite difficult as there were so many highlights. But the last two points on Saturday were essential. Poulter’s putt on the 18th that evening and also Luke Donald’s tee shot on the 17th. But I still cannot shake from my mind Justin Rose’s putt on the 17th on Sunday, and finally Martin Kaymer’s putt was incredible.

“The night before, Olazábal and myself, we had a very good conversation with Martin. Then on Sunday I was having breakfast with him and I said to him if I had a wish, it would be for him to hole the putt which meant Europe won the Ryder Cup, and, of course, Martin did exactly that.”